TEHRAN, August 18 -Yemeni army troops, backed by allied fighters from Popular Committees, have fired a domestically-manufactured ballistic missile at a military base in Saudi Arabia’s southern border region of Najran in retaliation for the Riyadh regime’s devastating military campaign against their impoverished country. 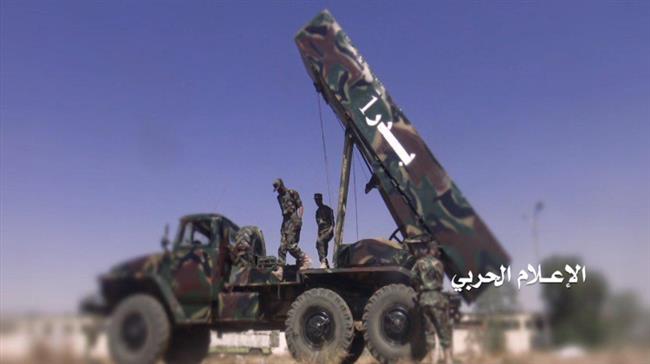 TEHRAN, Young Journalists Club (YJC) - Yemen’s Arabic-language al-Masirah television network, citing an unnamed military official, reported that Mostahadeth base had been targeted with a short-range Badr-1 missile late on Friday, adding that the projectile had hit the designated target with high precision.

On Saturday, at least two Saudi soldiers were killed when Yemeni forces and their allies fatally shot them at Mashal base in the kingdom’s southwestern region of Jizan.

Furthermore, Yemeni soldiers and fighters from Popular Committees fired a salvo of artillery rounds at a position of Saudi mercenaries in the al-Boq region of Najran, leaving a large number of them dead or injured.

Separately, a civilian lost his life and three others sustained injuries when Saudi missiles and artillery rounds rained down on residential buildings in the Shada'a district of Yemen’s northwestern province of Sa’ada.

Saudi warplanes also carried out more than 11 airstrikes against a village in the Hamdan district of Yemen’s western province of Sana'a. There were no immediate reports about possible casualties or the extent of damage caused.

Meanwhile, the spokesman for Yemen’s Houthi Ansarullah movement has called on Morocco to withdraw its military forces from the Saudi-led coalition involved in the atrocious military campaign against the impoverished Arab country.

“There is no justification for your participation in the massacre of Yemeni people, and supporting the criminal acts being committed by aggressors … Do not allow fear to stop you from walking out of the Saudi-led alliance,” Mohammed Abdul-Salam said.

He also extended his gratitude to those countries that have withdrawn from the Saudi-led coalition against Yemen, including Malaysia, saying, “Any country that pulls out of this alliance will inflict political and military losses on Saudis.”

A high-ranking UN aid official has warned against the “catastrophic” living conditions in Yemen, stating there is a growing risk of famine and cholera there.