TEHRAN, August 18 - With its air raid simulator and battlefield reconstructions, the Sacred Defense Museum in Tehran seeks to glorify sacrifices and victories made by the Iranians during the Iraqi imposed war when the country faced down "the whole world." 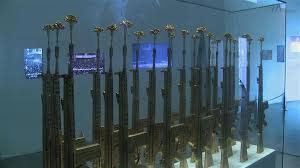 TEHRAN, Young Journalists Club (YJC) - As Iranians prepare to mark the 30th anniversary of the end of the war, they are being urged to display the same steadfastness as some countries are complying with unilateral sanctions being re-imposed by Washington after its withdrawal from a landmark 2015 nuclear deal between Iran and six world powers.

"The message of the museum is perseverance, resistance and protection of our honor," deputy director Seyyed Mohsen Hajbabian told AFP.

Former Iraqi dictator Saddam Hussein launched the war against Iran with the support of major powers and their regional allies in 1980, a year after the victory of the Islamic Revolution. The Iraqi-imposed war lasted eight years.