TEHRAN, August 18 -Turkish President Recep Tayyip Erdogan says his country will not “surrender” under the sanctions imposed by the United States over the detention of an American pastor, accusing Washington of launching an “attempted economic coup” against Ankara. 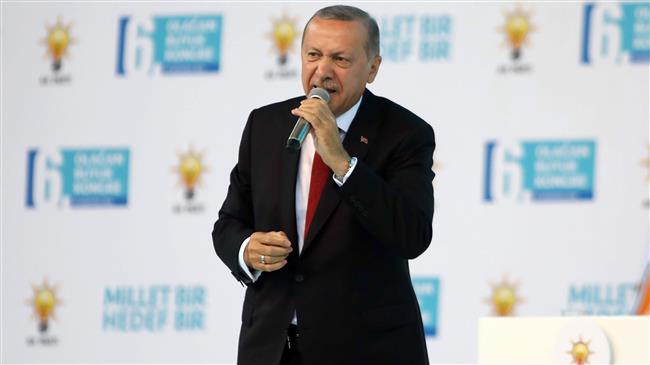 TEHRAN, Young Journalists Club (YJC) - “Today some people are trying to threaten us through the economy, through interest rates, foreign exchange, investment and inflation. We are telling them: we’ve seen your games, and we are challenging you,” the Turkish leader told thousands of his supporters during the sixth Congress of the ruling AK Party (AKP) in the capital Ankara on Saturday.

The Turkish lira has already lost about 30 percent of its value against the US dollar since the beginning of August, when tensions between the two NATO allies soared unprecedentedly over the detention of Andrew Brunson, an American Christen pastor, in Turkey over terror-related charges.

Brunson, 50, was indicted by a Turkish court on charges of having links with the Kurdistan Workers’ Party (PKK) militant group and the movement of the US-based opposition cleric Fethullah Gulen, whom Ankara accuses of having masterminded the July 2016 coup attempt against President Recep Tayyip Erdogan.

The US pastor, who has already spent nearly two years behind bars in Turkey, has denied the charges, calling them “shameful and disgusting.” If the evangelical pastor is found guilty, he will face up to 35 years in jail.

The pastor’s imprisonment and then house arrest have caused one of the deepest rows between Turkey and the US.

Erdogan further said that his country would never bow before those “who set up their own order by exploiting the world.”

Trump wrote on Twitter late last month that his country “will impose large sanctions on Turkey for their long time detainment of Pastor Andrew Brunson.” He also said on Friday that he had ordered to double US tariffs on Turkish aluminum and steel imports to 20 percent and 50 percent, respectively.

“We did not and will not surrender to those who act like a strategic partner but make us a strategic target,” Erdogan further said, in a clear swipe at Trump.

On Friday, Both Moody’s and Standard & Poor’s ratings agencies, downgraded Turkey closer to junk status amid the current lira crisis, prompting Erdogan to challenge those playing “games” on the economy.

Turkey and the US also disagree over their military interventions in the Syria war, Ankara's plan to buy missile defense systems from Russia and the US conviction of a Turkish state bank executive on sanctions-busting charges in January.