TEHRAN, August 18 -Jordan has condemned Israel’s recent move to shut down the al-Aqsa mosque, which forced Muslim worshipers out of the compound in the Old City of occupied East Jerusalem al-Quds. 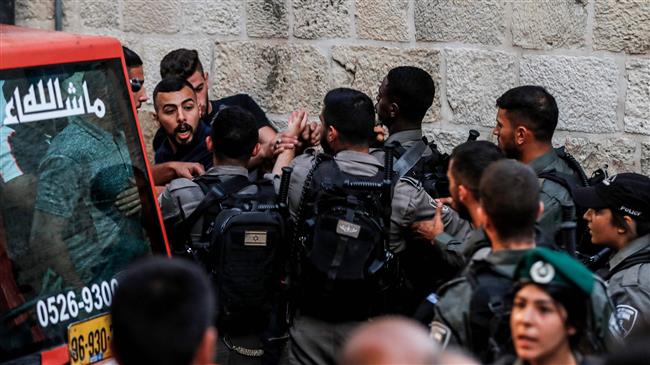 TEHRAN, Young Journalists Club (YJC) - Jordanian Media Affairs Minister and government spokeswoman Jumana Ghunaimat said Saturday that the Israeli regime’s move violated the sanctity of the holy site, warning that it would “touch off the passions of Muslims around the world.”

Israel’s move, she said, violates all international norms, which affirm respect to all places of worship.

The Jordanian minister, whose country serves as the custodian of the al-Aqsa mosque compound, held the Tel Aviv regime responsible for such provocations and called for an immediate halt to such practices.

On Friday, Israeli forces closed all entrances to al-Aqsa mosque for hours following an alleged anti-occupation attack in the occupied city.

The occupied Palestinian territories have witnessed new tensions ever since US President Donald Trump announced his decision on December 6 last year to recognize Jerusalem al-Quds as Israel’s capital and relocate the US embassy in Israel from Tel Aviv to the occupied city.

On December 21, the United Nations General Assembly overwhelmingly voted in favor of a resolution that calls on the US to withdraw its controversial recognition of Jerusalem al-Quds as Israeli “capital.”

Israel, however, rejected the world body’s resolution while thanking Trump for his decision to move the US embassy to Jerusalem al-Quds.

The Tel Aviv regime has been trying to change the demographic makeup of Jerusalem al-Quds by constructing settlements, destroying historical sites and expelling the local Palestinian population.