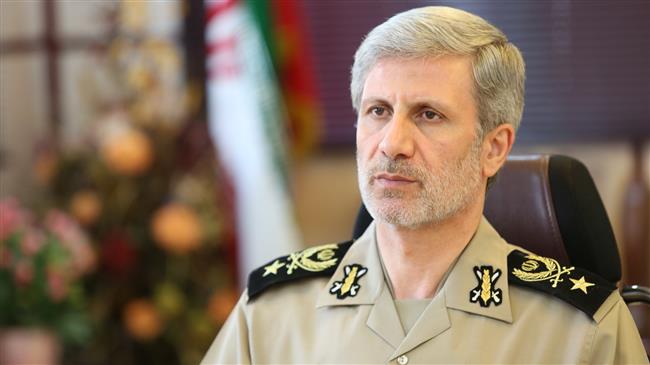 "Our focus has been on priorities, with the top priority being the missile issue,” he said. “We are in a good position in this field, but we need to develop it."

Hatami further touched on the recent unveiling of precision-guided ‘Fateh Mobin’ missile, stressing that Iranian missiles are good in terms of diversity and thus most attention has been paid to their agility, anti-radar capability, high precision and sustainability in different environmental conditions.

"We have never sought and will never seek weapons of mass destruction and nuclear weapons due to our religious beliefs and as stated by Leader of the Islamic Revolution [Ayatollah Seyyed Ali Khamenei], but we will not allow a violation of our interests and are looking for peace," he said.

"We operate within the framework of Iran's strategy based on active deterrence. Iran has never invaded a country, but anyone attempting to threaten our security will receive a decisive response," he added.

Hatami said, “A plane, which has passed several stages, will be presented on the Defense Industry Day and people will see the fighter jet flying from a close distance as well as the equipment used for its manufacture.”

Over the past years, Iran has made major breakthroughs in its defense sector and attained self-sufficiency in producing military equipment and hardware despite sanctions and economic pressures on the country.

The Islamic Republic maintains that its military power poses no threat to other countries and is merely attentive to its military doctrine of deterrence.

"We will spare no efforts to preserve the defense power and will develop it," the Iranian defense minister said, adding, "We have no other way because they (the enemies) want to disarm us."

Iran, he noted, has "designed its domestic defense and should make the enemy understand that if it hits us once, it will be beaten ten times."

Hatami's remarks came less than a month after US President Donald Trump effectively threatened Iran in a tweet addressed to President Hassan Rouhani and said, “You will suffer consequences the likes of which few throughout history have ever suffered before.”

Referring to the US plan to create a NATO-like security and political alliance between Arab countries to confront Iran, Hatami said the initiative "is mostly in words" and part of the enemy's strategy to sow discord in the region.

"It is highly unlikely that the Americans and especially the Zionist regime will dare to allow such an alliance between the Muslim countries as they know that Muslim nations have a clear objective and view Israel as the real enemy of the region."