FM Zarif: US 'dreams of doing the same' on Iran coup anniversary

TEHRAN, August 19 - Foreign Minister Mohammad Javad Zarif has hit out at the US for setting up a team to coordinate its pressure campaign on Iran, saying it is yet another plot to topple the Iranian government. 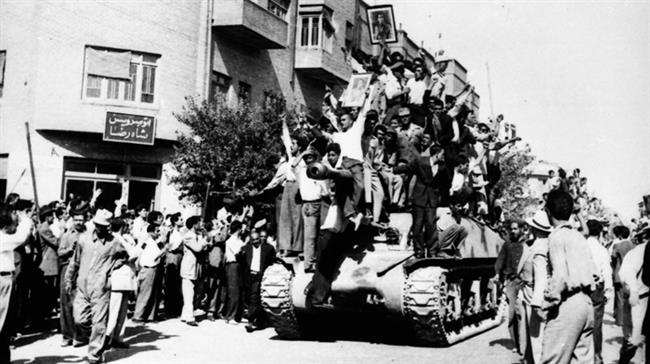 TEHRAN, Young Journalists Club (YJC) - “65 years ago today, the US overthrew the popularly elected democratic government of Dr. Mossadegh, restoring the dictatorship & subjugating Iranians for the next 25 years.

As Iran marks the anniversary of the notorious US- and UK-engineered coup, observers say Washington is still pursuing the policy of “regime change” against the Islamic Republic.

Sunday marks 65 years since the coup toppled the democratically-elected government of Prime Minister Mohammad Mosaddeq. The putsch came after Mosaddeq nationalized Iran's oil industry which had become a monopoly of Britain.

After decades-long denial by Washington, declassified documents released last year revealed the CIA role. Known as Operation Ajax, the US involvement fueled the surge of nationalism in Iran and poisoned US-Iran relations well into the 21st century.

“The US has been trying to bring down the Islamic Republic since the 1979 Revolution. This is to protect American oil and Israel,” said Mohammad Ghaderi, chief editor at Tehran Times.

“The administration of US President Donald Trump has more than doubled its actions, adopting a more hawkish stance towards Iran, and reintroducing punishing sanctions.

The White House is now openly using a subtle game of divide-and-conquer to disassemble the unity Iranians currently display,” he noted.

Back in May, Washington withdrew from its multilateral nuclear agreement with Tehran, and said it would reintroduced the sanctions that had been lifted under the accord.

On Thursday, the US State Department formed an Iran Action Group aimed at consolidating and intensifying the country’s efforts targeting the Islamic Republic.

It will be headed by senior policy adviser Brian Hook, who dismissed speculation that the new group’s creation during a week coinciding with the coup anniversary suggested that the US was pursuing regime change in Iran, calling the timing “pure coincidence.”

However, international news editor at Iran's Rasalat newspaper paper Hanif Ghaffari said both the Republican and Democratic parties have been trying to "dismantle the Islamic Republic either through soft power or military force.”

“I see no difference between the current and previous administrations. Their strategy on Iran entails regime change, and that’s been instituted,” he told Press TV.

Parliament Speaker Ali Larijani said on Sunday that by engineering the coup, the US and UK managed to subjugate Iran to decades of dictatorship.

They, he said, alleged that the coup had been meant to prevent the Soviet Union’s dominance over Iran, while the main reason was their continued access to Iranian crude oil.

“The bitter incident inflicted heavy economic, political, and security costs on the Iranian nation, and paved the way for decades of plundering of Iran’s oil and dominance [over it] by a vassal dictatorship,” Larijani said.

Imperialist machinations have re-emerged today in the form of efforts to meddle in Iran’s nuclear program, its defense power, and regional influence, he added.

Larijani said the US has masqueraded its economic sanctions on Iran under the veneer of supporting freedoms and human rights, and maintaining regional and international security.

“With the dark track record of the August 19 coup and setting up a vassal dictatorship, how do you dare to talk about freedom for the Iranian nation?” he said, addressing US leaders.

“Now that you have pitted terrorists against the region with your weapons, how do you dare to speak about regional and international security?” he continued.

Larijani said the Iranian nation will continue down its path in the face of all intrigues and confront aggressors through unity under the leadership of Ayatollah Seyyed Ali Khamenei.