TEHRAN, August 19 -The President of Afghanistan Ashraf Ghani attended a ceremony in Kabul on Sunday, August 19, held to mark the country's 99th anniversary of independence. 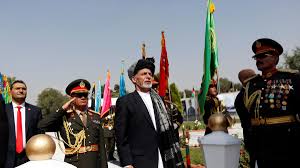 TEHRAN, Young Journalists Club (YJC) - Alongside an honour guard of the Afghan Armed Forces, Ghani laid a wreath at the Minaret of Independence in commemoration of the signing of the Anglo-Afghan Treaty in 1919 during the Third Anglo-Afghan War. Although Afghanistan was never a fully integrated colony of the British Empire, it was a British 'protectorate' for several decades starting from the 1880s, until the treaty was signed, and relations between the two countries became neutral.