TEHRAN, August 19 - At least 23 people were shot, two of them fatally, in a series of shootings over 24 hours across Chicago, Illinois, as America’s third largest city experienced yet another weekend of crime and gun violence. 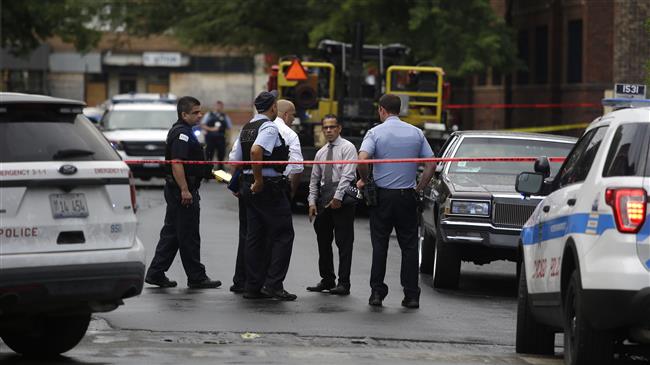 The first homicide happened in the Englewood neighborhood on Saturday when a 27-year-old man was shot in his chest and arm. He was later transferred to Stroger Hospital, where he was pronounced dead.

The second homicide happened in the West Garfield Park neighborhood. A 26-year-old man was shot on the left side of his body and his buttocks. He was taken to Mount Sinai Hospital, where he died Saturday.

Across the city, news of shootings is coming in faster than police can even get to any given scene. The episode only added to an already crime-filled city, as frustration continues to mount over the violence.

Amid the surging violence and bloodshed, pressure has been building for action by Mayor Rahm Emanuel, or for his resignation. He came under fire this past week for comments linking the violence outbursts in his city and the moral character of people in some ethnic neighborhoods.

Last month, thousands of Chicagoans marched in the city to pressure public officials to do more to stop gun-related violence.

There are more than 30,000 gun-related deaths annually in the United States, by far the highest among industrialized countries, according to the US Centers for Disease Control and Prevention (CDC).

The majority of Americans support stricter gun control laws but have little hope that Congress will pass such measures.