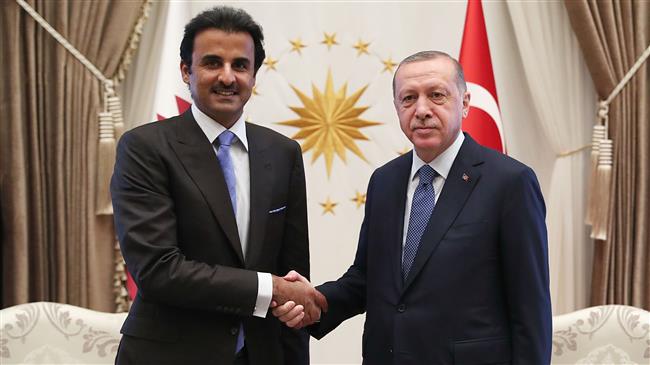 The deal, signed by both central banks' directors, will create a two-way currency exchange line, which will in turn bolster Turkey's currency.

The Turkish lira has lost about 30 percent of its value against the US dollar since the beginning of August. The currency crash occurred in the wake of tensions with the United States. The detention of Andrew Brunson, an American pastor, in Turkey has cast doubts over the future of Ankara's partnership with Washington.

On Friday, UAE State Minister for Foreign Affairs Anwar Gargash hit out at Qatar’s pledge to direct investment in Turkey.

In a post on his Twitter page, Gargash referred to a recent visit to Ankara by the Qatari emir and his pledge to help Turkey overcome an ongoing currency crisis and described it as an attempt to “buy sovereignty”.

“Full sovereignty cannot be bought with money but is achieved by establishing sincere and reliable relations with surrounding countries,” Gargash said in his tweet, the daily Gulf News reported.

The emir of Qatar arrived in Turkey on a “working” visit aimed at strengthening mutual cooperation.

In a “private” meeting, Turkish President Recep Tayyip Erdogan and Sheikh Tamim discussed bilateral relations and ways to expand the existing strategic ties between the two sides in various fields.

The announcement helped the Turkish national currency lira recover from record lows against the US dollar.

Only one day after Qatar pledged the investment, the lira strengthened some 4 percent against the greenback to around 5.75 per dollar.

Media outlets close to the UAE and Saudi Arabia quoted “analysts” as saying that Qatar had been “forced” to make the investment pledge in exchange for keeping the Turkish military base and Turkish soldiers on its soil.

On August 10, US President Donald Trump announced that his administration was doubling steel and aluminum tariffs on Turkey. The move came as part of the US’ reaction to Turkey´s two-year-long detention of an American pastor over terrorism charges.

In retaliation, Erdogan raised tariffs on some American commodities, and called on Turkish people to boycott US-made electronic goods, including Apple’s iPhones.