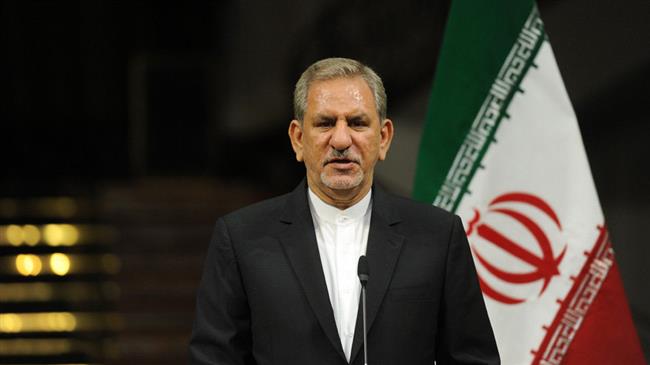 TEHRAN, Young Journalists Club (YJC) - Speaking in an interview with IRNA, which was published on Sunday, Jahangiri noted that European countries have told Iran's Foreign Ministry that they will be taking measures before US sanctions come into effect against the country's oil and banking sectors to make up for any possible losses that Tehran may suffer.

The United States has ramped up pressure on Iran after US President Donald Trump withdrew Washington in May from the landmark Iran nuclear agreement, officially known as the Joint Comprehensive Plan of Action (JCPOA) reached between Iran and the P5+1 group of countries in 2015, and decided to re-impose unilateral sanctions against Tehran.

he sanctions will cover Iran’s purchases of the dollar, its trade in gold and precious metals, and its automotive sector. A second batch of bans will be re-imposed in November with the aim of curtailing Iran’s oil exports and shipping sectors.

The Iranian veep further said that the US sanctions have created no limitations so far for European countries in the economic sector, particularly with regard to oil purchases and trade exchanges.

Jahangiri noted that some private companies, particularly Europeans, have left Iran after the re-imposition of the US sanctions, but their move has not been "very determining."

He said the Europeans have given assurances that they would adopt approaches and take certain measures through their small and medium enterprises to make up for the effects of US bans while Iran's Foreign Ministry is also following up on the case.

The senior Iranian official expressed hope that the European countries would fulfill their commitments, emphasizing that Tehran is drawing up plans for all contingencies.

He said Iran is seeking strategies to adopt regardless of whether Europeans and other countries would remain committed to their obligations or fail to solve the existing problems.

"We are looking for ways to sell our oil and transfer its revenues (to the country)," Jahangiri pointed out, adding that Iran is still making efforts to enjoy the JCPOA's benefits.

He emphasized that the US had isolated itself by pulling out of the nuclear deal, but "all countries, except two or three, have supported Iran's stance."

In a statement on August 6, the European Union voiced its deep regret over the US renewal of sanctions on Iran, saying the 28-nation bloc and other signatories would work on keeping financial channels with Iran open.

"The JCPOA is working and delivering on its goal, namely to ensure that the Iranian program remains exclusively peaceful, as confirmed by the International Atomic Energy Agency (IAEA) in 11 consecutive reports," the statement read.

In a televised interview on Wednesday night, Iranian Foreign Minister Mohammad Javad Zarif said the United States isolated itself when it left the nuclear deal with Iran.

"Today the US' closest allies, apart from a few of our neighbors, are no longer aligned with Washington," Zarif said, adding that the US' withdrawal from the JCPOA has perfectly manifested the country's isolation on the global stage.