TEHRAN, August 20 - Indian health authorities prepared defenses against the spread of disease in flood-hit Kerala state on Monday as water receded and a huge clean-up gathered pace after the worst floods in a century killed more than 200 people. 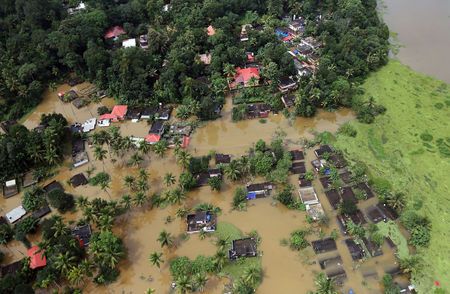 TEHRAN, Young Journalists Club (YJC) - Incessant rain since Aug. 8 in the southern state has swelled rivers and triggered landslides. Dozens of people are missing and nearly a million are sheltering in thousands of relief camps, state officials said.

"The biggest challenges immediately ahead are cleaning of the flood-hit houses, rehabilitation, and prevention of water-borne diseases," said Mahesh P., a village-level officer from Rayamangalam, some 45 km (28 miles) from Kerala's financial capital of Kochi.

Light to moderate rain was expected across Kerala on Monday, bringing some respite to rescue workers, who have been battling rising waters and mudslides to reach tens of thousands of stranded villagers.

Rainfall in the state during the June-September monsoon season has been more than 40 percent higher than normal, with torrential rain in the last 10 days forcing authorities to release water from dozens of dangerously full dams, sending surges into rivers that then overflowed their banks.

Anil Vasudevan, who handles disaster management at Kerala's health department, said the state was preparing to battle any outbreak of diseases in the relief camps and preventive medicines were being distributed.

Mahesh said villagers had all pulled together to rescue people and prevent an even bigger disaster.

"The bulk of the credit for the rescue goes to the ordinary citizens. The army, the navy, the local authorities assisted them," Mahesh said.

"The flood has bonded the people like never before, with people sharing whatever they had."