TEHRAN, August 19 - Jailed former president Luiz Inacio Lula da Silva has increased his support by almost 5 percentage points and would win Brazil's October presidential election if he is allowed to run, a poll by CNT/MDA showed on Monday. 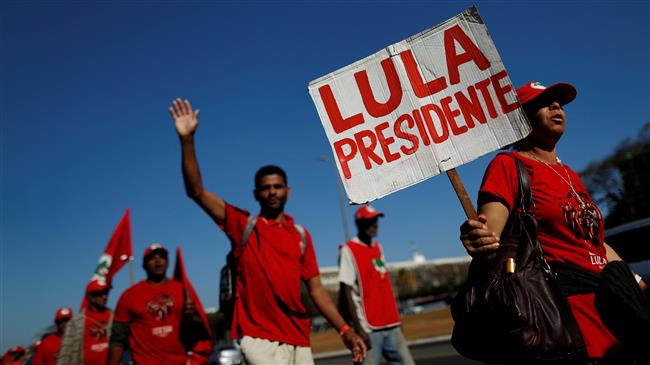 TEHRAN, Young Journalists Club (YJC) - Electoral authorities are expected to bar Lula from the election due to a corruption conviction. Despite that, he took 37.3 percent of voter intentions in the latest poll, up from 32.4 percent in the same poll in May.

His nearest rival was far-right candidate Jair Bolsonaro with 18.3 percent, followed by environmentalist Marina Silva with 5.6 percent and business-friendly Geraldo Alckmin with 4.9 percent.

Support for Marina Silva and center-left candidate Ciro Gomes has slipped since the May poll, while support has increased for Bolsonaro and investors' favorite Alckmin, a former governor of Sao Paulo state.

It was the first major poll since candidacies were officially registered last week, but it did not provide results for the likely scenario of a race without Lula.

The leftist leader was jailed in April to start serving a 12-year sentence for receiving bribes.

The nationwide survey of 2,002 people was carried out by pollster MDA for the transportation sector lobby CNT between Aug. 15 and 18 and has a margin of error of 2.2 percentage points.