Gas field off UK faces US hurdle put for Iran

TEHRAN, August 21 -A deadline is looming for BP and its partners to win a waiver of US sanctions that will allow continued production from the Rhum natural gas field in the North Sea, and failure to win a concession could jeopardize the transfer of BP's interest in the field to Serica Energy. 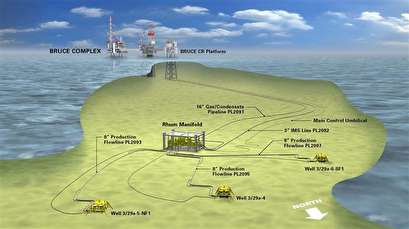 TEHRAN, Young Journalists Club (YJC) -A deadline is looming for BP and its partners to win a waiver of US sanctions that will allow continued production from the Rhum natural gas field in the North Sea, and failure to win a concession could jeopardize the transfer of BP's interest in the field to Serica Energy.

The amounts of gas at stake are relatively small. Rhum first came on line in 2005 and output has dropped by a third since peaking in 2007, to around 170 Mcf/d or 4.8 million cu m/day. This amounts to roughly 2% of UK daily consumption, which has mostly been on a downward path in the last decade.

Serica, a small, London-listed company, said this month it was in "advance stage" talks with US authorities to obtain the waiver. The company said BP, the UK government and the industry regulator had met the US Office of Foreign Assets Control, which administers sanctions, to try to secure continued production from the field, which has been 50% owned by Iran since the days of the Shah.

Serica's plan to take over operations at Rhum from BP is part of a wave of oil and gas field transfers by oil majors to smaller players focused on maximizing output from mature fields that are past their peak. Such deals are sometimes done for nominal sums as the majors seek an exit. In the case of Rhum, BP owns 5% of Serica.

Without a waiver, however, the deal is in doubt as the current license from the OFAC expires on September 30.

At stake is not only Rhum, but also two fields that share facilities with Rhum and are seen as a single economic unit: Keith and Bruce. Serica aims to buy BP's share in these two fields under the same deal, and has agreed separately to buy Total's shares in the two fields, provided the Rhum sale goes ahead.

Iran's stake in the Rhum license was granted in 1972. A year later, rising Middle East tensions would lead to the OPEC oil embargo, but close ties between the UK and Iran continued. BP traces its origins back to Iran through the emergence of Anglo-Persian Oil Company.

The expansion of sanctions against Iran in 2010 meant Rhum had to be shut down, raising doubts about its future and that of the nearby fields, which in their own right produce relatively little; combined oil and gas output from Bruce and Keith last year totaled 12,000 b/d of oil equivalent.

A solution was found in 2014 by which Iran's share of revenues was paid to an escrow account for future dispersal. A similar arrangement could to be on the table now after US President Donald Trump decided in May to reinstate sanctions that had been eased under an international agreement in 2015.

Hopes that Rhum might be excluded were raised by the US' decision this month to waive sanctions on a vital gas project for Europe, the Southern Gas Corridor, in which National Iranian Oil Company holds a 10% stake.

However, the Trump administration's position on Rhum remains unclear. Energy security arguments, that the field is needed to avert UK dependence on Russia, a key rationale for the Southern Gas Corridor, may struggle to gain traction.

Experts, however, argue UK energy security needs all the help it can get. Domestic gas production from the North Sea has ticked up in the last four years thanks to newly producing areas such as Cygnus and the Laggan-Tormore West of Shetland fields. However, that has barely made a dent when compared with an overall two thirds' drop in gas production since 2000. Almost half of UK consumption is covered by imports, mainly from Norway.

Energy security has been further damaged by the decision of legacy provider Centrica this year to close the UK's Rough, a sub-sea storage facility, experts say. The UK faces "increasing exposure to price volatility in line with the ongoing increase in... gas import dependency and decline in gas storage capacity," Oxford Institute for Energy Studies research fellow Jack Sharples said in a recent paper.

Serica Energy CEO Mitch Flegg sounded optimistic after the recent talks on Rhum in Washington. Flegg said the UK was showing "huge political will" to secure a waiver. He did not rule out Serica buying BP's stake and keeping Rhum operating without the waiver, but added it could cause problems, not least if the company needs financing from US banks.

"We are confident that we are going to get a resolution," Flegg told S&P Global Platts. "The British government has made it clear that this is something of national importance."

Experts approached by Platts were non-committal on the chances of a waiver. "The Trump administration seems determined not to grant any waivers," Professor Paul Stevens of the Royal Institute of International Affairs Chatham House, said. "However, such determination can change from tweet to tweet."