TEHRAN, August 21 -Myanmar’s leader Aung San Suu Kyi says Bangladesh is responsible for the start of the repatriation process of the Rohingya Muslims who have fled state-sponsored violence in Myanmar — and who are awaiting safety guarantees to return — warning that the risk of “inter-communal violence” remains once the minority Muslims do return. 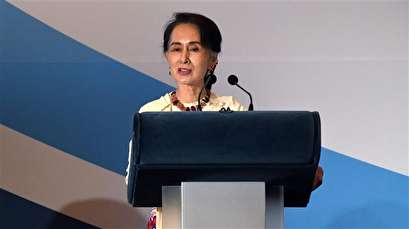 TEHRAN, Young Journalists Club (YJC) -Myanmar’s leader Aung San Suu Kyi says Bangladesh is responsible for the start of the repatriation process of the Rohingya Muslims who have fled state-sponsored violence in Myanmar — and who are awaiting safety guarantees to return — warning that the risk of “inter-communal violence” remains once the minority Muslims do return.

Suu Kyi said in a lecture in Singapore on Tuesday that spaces have been mapped out for the resettlement of the Muslims who have fled to Bangladesh. She declined to mention the name “Rohingya.”

Thousands of Rohingya Muslims were killed, injured, arbitrarily arrested, or raped by Myanmarese soldiers and Buddhist mobs mainly between November 2016 and August 2017, when many of the surviving members of the community started fleeing to Bangladesh en masse.

In their absence, the Myanmarese government has bulldozed their villages, built new housing structures, and shuttled Buddhist citizens from elsewhere in the country to populate the area.

The UN has described the campaign as a textbook example of “ethnic cleansing” and possibly “genocide.”

Myanmar and Bangladesh reached a deal late last year on the repatriation of the Rohingya refugees, who fear similar violence if they return.

Suu Kyi, who has been criticized for her inaction regarding the crisis, also said it was difficult to set a time frame for the Muslims’ return, suggesting that the onus was on Bangladesh for the process to get started.

“The returnees have to be sent back by Bangladesh. We can only welcome them at the border,” she said, adding, “I think Bangladesh would also have to decide how quickly it wants the process to be completed.”

The state-sponsored violence in Myanmar forced some 700,000 Rohingya to flee to Bangladesh. Many of the displaced Rohingya are either living in squalid camps or just across the border in a plot of land known as the “no man’s land.”

Considered by the UN as the “most persecuted minority group in the world,” the Rohingya are denied citizenship and are branded by Myanmar as illegal immigrants from Bangladesh, which likewise denies them citizenship.

The crackdown on the Muslims has been blamed on what the Myanmarese military says were attacks on military posts in Myanmar’s Rakhine State.

“The danger of terrorist activities, which was the initial cause of events leading to the humanitarian crisis in Rakhine remains real and present today,” Suu Kyi claimed.

“Unless this security challenge is addressed the risk of inter-communal violence will remain. It is a threat that could have grave consequences, not just for Myanmar but also for other countries in our region and beyond,” she said.

Suu Kyi has been largely silent on the military crackdown. When she has spoken out, she has taken the military’s side.