TEHRAN, August 21 -The annual Hajj pilgrimage has reached its climax in Saudi Arabia, with pilgrims symbolically stoning the devil and celebrating -- along with Muslims around the world -- Eid al-Adha (the Feast of Sacrifice). 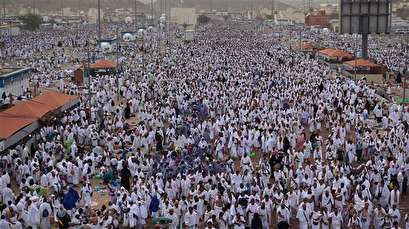 TEHRAN, Young Journalists Club (YJC) -The annual Hajj pilgrimage has reached its climax in Saudi Arabia, with pilgrims symbolically stoning the devil and celebrating -- along with Muslims around the world -- Eid al-Adha (the Feast of Sacrifice).

On Tuesday, more than two million pilgrims performed the symbolic stoning of the devil in Mina near the holy city of Mecca. They threw stones at three pillars, called the Jamarat, which represent the devil, showing their rejection of sin and temptation.

The ritual coincides with Eid al-Adha, which is one of the most significant festivals on the Muslim calendar.

While many Muslims celebrate the auspicious occasion on Tuesday, millions of others, including in South Asia, will celebrate the religious holiday on Wednesday.

Muslims traditionally mark Eid al-Adha with the sacrifice of sheep and cattle.

The major rituals of the Hajj are performed during a five-day period from the 8th through the 12th of Dhu al-Hijjah on the Muslim lunar calendar.

On Monday, worshipers performed day-long prayers and recitals of the Holy Qur’an on a rocky hill known as Mount Arafat, east of Mecca, where Prophet Muhammad (PBUH) delivered his last Hajj sermon.

The Hajj pilgrimage is a religious ritual, which must be performed at least once by every able-bodied Muslim who can afford it.

It is one of the largest acts of mass pilgrimage in the world.

The holy pilgrimage is also a demonstration of Muslims’ unity and their submission to Allah.