TEHRAN, August 21 -Two Cambodian journalists charged with espionage for filing news reports to a U.S.-funded radio station were freed on bail on Tuesday, in a move seen by a rights group as a government bid to improve its image weeks after a disputed election. 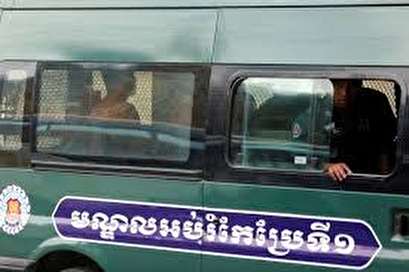 TEHRAN, Young Journalists Club (YJC) -Two Cambodian journalists charged with espionage for filing news reports to a U.S.-funded radio station were freed on bail on Tuesday, in a move seen by a rights group as a government bid to improve its image weeks after a disputed election.

The case of the two reporters, Uon Chhin and Yeang Sothearin, compounded concern about a crackdown on criticism and dissent by Prime Minister Hun Sen, who extended his rule of more than three decades in a general election in July.

The two, who used to work for the Washington-based Radio Free Asia (RFA), had been in pre-trial detention since they were arrested in November and charged with espionage and producing pornography. They denied the charges.

Y Rin, a spokesman at the Phnom Penh Municipal Court, said the two had been released on bail but the charges against them would remain.

They smiled and hugged each other as they walked out of a prison on the outskirts of the capital, Phnom Penh.

“Actually, our freedom is not yet complete,” Yeang Sothearin told reporters.

“We are still required to show up in court and we demand the court to drop all charges,” he said.

The government accused RFA, which broadcasts in the Khmer language, of being biased toward the opposition.

RFA shut down its Phnom Penh office last September complaining of a “relentless crackdown on independent voices”, which made it impossible for it to guarantee the integrity of its journalistic mission.

Hun Sen has accused the United States of trying to end his rule of more than 33 years.

The releases were the latest in a what Chak Sopheap, executive director at the Cambodian Center for Human Rights, said was an attempt by the government to improve its image.

“This seems to be an attempt on the part of the authorities to regain some form of legitimacy in the eyes of the international community and of the Cambodian people,” Chak Sopheap told Reuters.

Political analyst Kim Sok was released on Aug. 17 after serving 18 months on what he said were politically motivated charges. Land rights activist Tep Vanny was pardoned this week after two years in prison.

RFA spokesman Rohit Mahajan welcomed the release of the reporters.

“While this is a positive development, all charges against them should be dropped and their case dismissed,” he said.