TEHRAN, August 22 - A powerful earthquake shook Venezuela's northeastern coast and parts of the Caribbean but likely caused little damage besides knocking out power in some places and toppling supermarket shelves because of its depth, experts said. 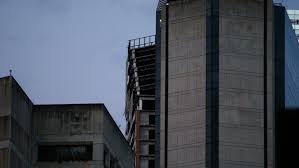 TEHRAN, Young Journalists Club (YJC) - The magnitude 7.3 quake Tuesday was the largest to strike Venezuela since 1900, according to the U.S. Geological Survey. But at a depth of some 76 miles (123 kilometers) beneath the Earth's surface it appeared to have caused only limited damage even near its epicenter a few miles off the Cariaco peninsula stretching into the eastern Caribbean.

"Shaking does die off at a distance," said seismologist Lucy Jones, a research associate with the California Institute of Technology, adding that the earthquake's considerable depth likely prevented a tragedy.

In Cumana, the biggest city near the quake's center, supermarket shelves came crashing down.

In downtown Caracas, concrete from the top floors of the unfinished Tower of David skyscraper fell to the sidewalk, forcing firefighters to close off traffic. A block away, children wearing surgical masks stretched their neck toward the 620-foot (190 meter) building after having fled a nearby foundation for poor children suffering from cancer.

"We felt something strong and they told everyone to run," said Marisela Lopez, who was at the foundation with her 7-year-old daughter when the quake struck.

Construction of the Tower of David began in 1990 as a symbol to the OPEC nation's ambitions of becoming a regional finance center. But it was abandoned after a banking crisis and in the past two decades of socialist rule has become a symbol of urban blight, having been occupied by squatters until 2015.

The quake was felt as far away as Colombia's capital of Bogota, where authorities briefly closed the international airport to inspect for runway damage.

The confusing moments after the quake were captured live on Venezuelan state television as Diosdado Cabello, the head of the all-powerful constitutional assembly, was delivering a speech at a march in support of the socialist government's recent package of reforms to rescue an economy beset by hyperinflation and widespread shortages.