TEHRAN, August 22 - Italy has made headlines as a hard place for migrants recently, with racist attacks against blacks on its soil and a new government closing Italian ports to people rescued in the Mediterranean Sea. 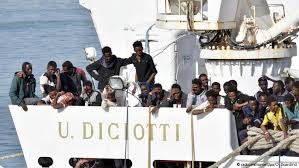 TEHRAN, Young Journalists Club (YJC) - But not all Italians are on board, and some are even reaching out to migrants.

Barbara di Clemente, a 79-year-old grandmother, opened her heart and home to Moriba Mamadou Diarra from Mali, hosting him at her two-bedroom apartment in Rome for the past four months. The 18-year-old says he fled his country because there, his "rights had been denied" and he couldn't study and build a better future for himself.

She says that taking in Diarra, who dreams of playing professional soccer, has been her own way of helping someone in need while making a political statement against Italy's populist, anti-migrant government. Di Clemente is among a growing number of Italians who have applied to host young migrants, stepping in to fill a gap in government services even as the number of new arrivals to Italy plummets.

"Something in my soul spoke to me," Di Clemente said of her decision to host Diarra, adding that having lived through World War II, she is particularly sensitive to wars and poverty.

She contacted Refugees Welcome, a humanitarian group founded in Germany in 2015 that helps organize migrant hosting and now has chapters in 16 countries. The Italian chapter, which normally registers one or two hosting offers per day by Italians, saw an 80 percent spike in offers since the June 10 decision by Interior Minister Matteo Salvini to turn away a rescue vessel carrying more than 600 migrants rescued from the Mediterranean.

Sara Consolato, the group's spokeswoman, says volunteers want to show the migrants that not all Italians agree with the government's hard line. "They are a minority, but they exist," she said. "They don't identify with these policies and they feel the time has come to take action."