TEHRAN, August 23 - Iraqi officials plan to ask Washington for waivers on Iran sanctions which could hit crucial supplies, with one political leader pledging that Baghdad will never accept the “cruel” measures. 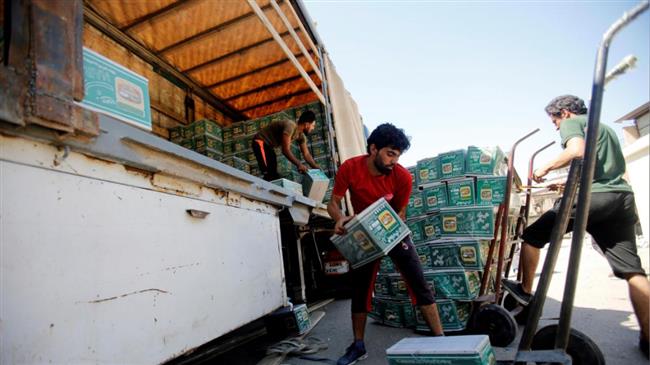 TEHRAN, Young Journalists Club (YJC)  - Iran is a source of assorted goods ranging from food and agricultural products to home appliances and spare car parts to the neighboring Arab nation, with annual trade standing at more than $12 billion.

The first batch of US sanctions which came into affect early this month target Iran's trade in US dollars, gold and other precious metals as well as its automotive sector, with the second wave due in November set to hit its energy and shipping sectors.
Iraqi Prime Minister Haider al-Abadi has said his government would only respect the dollar ban in transactions with Iran.

Asked earlier this month if Baghdad would stop imports of commodities, appliances and equipment by government companies from Iran, he said, “We honestly have not made any decision regarding this issue until now.”

On Tuesday, Iraqi government and central bank officials were quoted as saying that the country was sending a delegation to Washington to ask for exemptions in applying the sanctions.

"The government plans to ask Washington for a waiver. It's going to happen soon," Reuters quoted one unnamed central bank official as saying.

Iraq was hit by protests this summer, spurred by anger over inadequate public services. Officials fear shortages of key data-x-items could spark fresh unrest if Baghdad complies with the US sanctions.

They said they were asking each ministry to draw up a list of imports that are essential to Iraq's economy and demand from US authorities to exempt them from sanctions.

One official said the Iraqi central bank had circulated a directive, informing private banks that they were allowed to carry out transactions in euros.

Another official said Baghdad was encouraged by the position of European Union states towards Iran in respect to the American sanctions.

France, Britain and Germany as well as other European countries have strongly opposed the sanctions and unveiled measures to protect their companies doing business with Iran.

“They [Europeans] keep dealing with Iran in euros so why shouldn't we?" Reuters quoted the unnamed central bank official as saying.

Many private companies in Iraq can carry on dealing with Iran without any problem because they do not have any US investments.

More than 1,300 kilometers of joint borders could also make it impossible to prevent Iranian commodities from trickling into Iraq.

But senior Iraqi cleric Ammar al-Hakim on Wednesday made it clear that Baghdad “cannot take a hands-off approach toward intensified economic sanctions against the Iranian nation."

“We will never accept the imposition of cruel sanctions against nations and we will never allow our country's interests to be jeopardized. We are expressing this explicitly and without fear of anyone,” he told worshipers at Eid al-Adha prayers.

“It is difficult to believe that Iraq will not be affected from the Islamic Republic of Iran’s exposure to the difficulties and complexities of the conflict with the United States,” said Hakim whose National Alliance bloc is being rooted as a partner in the future Iraqi coalition government.

The cleric urged the Iraqi government to “pursue a serious and consistent policy through all available means to create a common ground on US and Iranian interests away from sanctions and threats that bring nothing to the region except war and destruction.”

On Tuesday, an official in Tehran said Iran had resumed electricity exports to Iraq which has a deficit of some 7,000 megawatts on its national grid after decades of war and blockade following the US invasion.

Iran cut off electricity supplies to Iraq in July as rolling blackouts and water shortages in the southern Khuzestan province in the face of sizzling temperatures touched off a series of protests.

Mahmoud Reza Haqqi-Fam, the spokesman of Iran Power Transmission, Generation and Distribution Company (Tavanir), said Tuesday that exports had resumed to Iraq, Afghanistan and Pakistan 10 days ago and were about to rise.