TEHRAN, August 23 - Ankara has censured US National Security Adviser John Bolton’s latest comments about the Turkish financial crisis, saying the remarks prove that Washington is waging a economic war against its NATO ally. 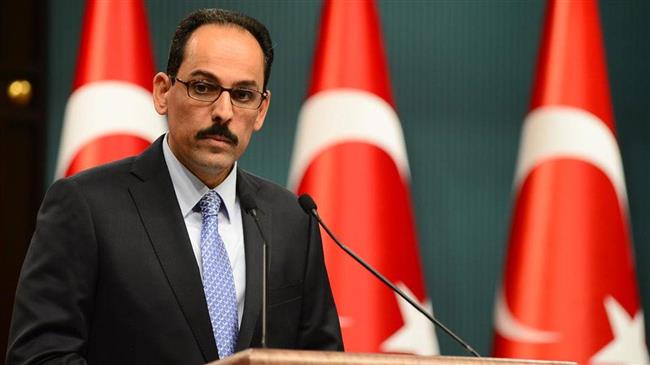 TEHRAN, Young Journalists Club (YJC) - In statement sent to Reuters on Wednesday, Turkish presidential spokesman Ibrahim Kalin complained that the recent policies adopted by the administration of US President Donald Trump “are at odds with the fundamental principles and values of the NATO alliance.”

The two sides are entangled in a dispute over an American pastor standing trial in Turkey over terror charges.

Pastor Andrew Brunson been accused of having links with the outlawed Kurdistan Workers’ Party (PKK) and the Gulen movement, which Turkey blames for the 2016 failed military coup.

The US later took the dispute to the economic front, taking a series of punitive measures against Turkey, including imposing sanctions on Turkish ministers and doubling of steel and aluminum tariffs, which have led to a sharp decline in the Turkish lira currency.

Ankara has vowed not to back down in the face of US attempts to achieve its political goals through economic pressure.

Commenting on the row, Bolton had said in an interview with Reuters on Tuesday that Turkey could end its lira crisis “instantly” by freeing the pastor, and that a Qatari cash infusion would not help Ankara’s economy.

Erdogan’s spokesman described Bolton’s statement as “proof that the Trump administration is targeting a NATO ally as part of an economic war.”

“The Trump administration has ... established that it intends to use trade, tariffs and sanctions to start a global trade war,” Kalin said.

However, he added, Turkey “has no intention of starting an economic war with any party. It cannot, however, be expected to keep silent in the face of attacks against its economy and judiciary.”

Elsewhere in his interview, Bolton had accused the Turkish government of holding Brunson “illegitimately,”

“Look, the Turkish government made a big mistake in not releasing Pastor Brunson,” the US official said. “Every day that goes by that mistake continues, this crisis could be over instantly if they did the right thing as a NATO ally, part of the West, and release pastor Brunson without condition.”

In response, Kalin denounced the US’s “disregard” of Turkey’s legal process as “unacceptable.”

He further urged the US to respect Turkey’s judicial independence, saying, “There is rule of law in Turkey and the Andrew Brunson case is a legal issue. There is an ongoing legal process related to this individual.”