TEHRAN, August 25 - The Russian Defense Ministry says the US, Britain and France are preparing to conduct a fresh aerial assault against Syria under the pretext of the alleged use of chemical weapons by the Damascus government. 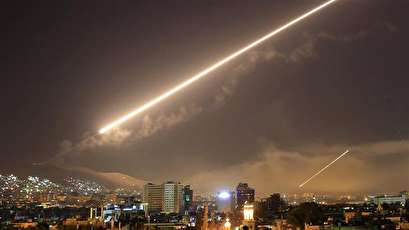 TEHRAN, Young Journalists Club (YJC) -The Russian Defense Ministry says the US, Britain and France are preparing to conduct a fresh aerial assault against Syria under the pretext of the alleged use of chemical weapons by the Damascus government.

The ministry spokesman Major General Igor Konashenkov said on Saturday that a group of militants, who were trained by a private British military company to work with poisonous materials, had already arrived in Syria's northwestern Idlib Province.

"To carry out the alleged 'chemical attack' in the city of Jisr al-Shughur in the province of Idlib, militants from the Tahrir al-Sham group had delivered 8 tankers with chlorine… to a village a few kilometers from Jisr al-Shughur," Konashenkov said.

The Russian general further warned that a possible militant gas attack on Syria would be followed by a Western strike against the Arab country.

"This provocation with the active participation of the British special services will serve as another pretext for the US, UK and France to conduct a missile strike on the Syrian government and economic facilities," he said.

The official further noted that the American destroyer USS The Sullivans armed with 56 cruise missiles had also arrived in the Persian Gulf and a US В-1В bomber carrying 24 air-to-surface AGM-158 JASSM cruise missiles had been deployed at Al Udeid airbase in Qatar.

"Western countries' actions in spite of their public statements are aimed at another sharp deterioration of the situation in the Middle East region and the disruption of the peace process on the territory of Syria."

The warning comes as the Syrian army is now preparing for an operation to liberate Idlib Province, the last major militant stronghold.

On Saturday, Bloomberg reported that US National Security Adviser John Bolton had warned his Russian counterpart, Nikolai Patrushev, that Washington was prepared to take strong military action against Syria if it used chemical weapons in Idlib.

Bolton issued the warning during his Thursday's talks with Patrushev, the report quoted four people familiar with the discussions as saying.

On April 14, the US, Britain and France launched a coordinated missile attack against sites and research facilities near Damascus and Homs with the purported goal of paralyzing the Syrian government’s capability to produce chemicals.

The strike came one week after an alleged gas attack on the Damascus suburb town of Douma.

Both Damascus and Moscow accused the White Helmets volunteer group of having staged the suspected chemical weapons attack in Douma.

As countdown begins for the Idlib counter-terrorism campaign, Turkey tries to avert the push, claiming that it will lead to a humanitarian crisis.

Speaking at a press conference with his Russian counterpart, Sergei Lavrov, in Moscow on Friday, Turkish Foreign Minister Mevlut Cavusoglu said that the two countries could cooperate on separating Idlib “terrorists" from opposition groups.

Lavrov, for his part, acknowledged that the situation in Idlib is “complex” and called for the separation of militants from opposition outfits.

He also said that when Turkey, Iran and Russia held talks on Syria's ceasefire zones, Moscow did not expect militants to be “using it as a human shield” from which they could attack the government.