TEHRAN, August 25 - South Africa’s ruling African National Congress (ANC) is forging ahead with its plans to change the constitution to allow the expropriation of land without compensation. 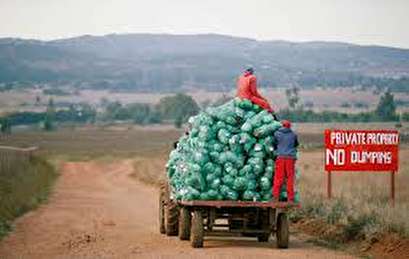 TEHRAN, Young Journalists Club (YJC) -South Africa’s ruling African National Congress (ANC) is forging ahead with its plans to change the constitution to allow the expropriation of land without compensation.

U.S. President Donald Trump this week sent the rand into a tailspin by tweeting that he would ask Secretary of State Mike Pompeo to study South African “land and farm seizures” and the “killing of farmers”.

President Cyril Ramaphosa defends the plan, announced on Aug. 1, as no “land grab” from whites who still own most of South Africa’s territory. Here are the key issues in the debate.

WHAT NEEDS TO BE ADDRESSED?

South Africa has a history of colonial conquest and dispossession that pushed the black majority into crowded urban townships and rural reserves.

The 1913 Native Lands Act made it illegal for Africans to acquire land beyond these reserves, which became known as “Homelands”.

While blacks account for 80 percent of South Africa’s population, the former homelands comprised just 13 percent of the land. The traditional leaders that oversaw the homelands still hold significant sway.

Estimates vary but the consensus is that most privately owned land remains in white hands, making it a potent symbol of the wider economic and wealth disparities that remain two decades after the end of white-minority rule.

WHAT HAS BEEN DONE?

Since the end of apartheid in 1994, the ANC has followed a “willing-seller, willing-buyer” model under which the government buys white-owned farms for redistribution to blacks. Progress has been slow.

Based on a survey of title deeds, the government says blacks own four percent of private land, and only eight percent of farmland has been transferred to black hands, well short of a target of 30 percent due to have been reached in 2014.

AgriSA, a farm industry group, says 27 percent of farmland is in black hands. Its figure includes state land and plots tilled by black subsistence farmers in the old homelands.

Critics allege that many farms transferred to emerging black farmers have failed because of a lack of state support, an allegation Ramaphosa denies.

HAIL TO THE CHIEFS

The 17 million people who reside in the former homelands, a third of the population, are mostly subsistence farmers working tiny plots on communal land.

Critics of ANC land policy say that instead of seizing farmland from whites, such households should be given title deeds, turning millions into property owners. Reformers in the ANC have signaled their support for such a policy.

Tribal chiefs were not amused, and warned the ANC in July to exclude territory under their control from its land reform drive. The Zulu King evoked the Anglo-Zulu war and the specter of conflict over the issue.