TEHRAN, August 25 - At least three people have been killed in a bomb blast in the eastern Afghan province of Nangarhar. 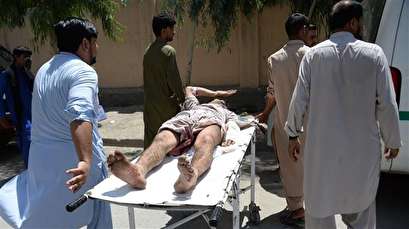 TEHRAN, Young Journalists Club (YJC) -At least three people have been killed in a bomb blast in the eastern Afghan province of Nangarhar.

The blast occurred Saturday morning as dozens of people were rallying in support of a candidate disqualified from parliamentary elections in October, local officials and press reports said.

At least eight other were reportedly injured. No group has yet claimed responsibility.

The attack occurred while backers of the disqualified candidate were attempting to close down the office of the election commission, according to Nangarhar provincial governor’s spokesman, Attaullah Khogyani, who insisted that the protesters had been forewarned of a potential terror act.

"We had requested the protesters to stop their demonstrations because they could be targeted by militants but they rejected our security message," said Khogyani.

Meanwhile, supporters of other candidates disqualified by the election commission waged sit-in protest outside several other branches of the electoral body in the country over the past two weeks.

According to local news outlets, Afghan security forces attempted to disperse the protesters on Saturday.

The latest terror attack came after another deadly bomb blast outside an Afghan election office in Afghanistan’s capital of Kabul earlier this month when demonstrators rallied to challenge the commission's decision to disqualify 35 candidates from contesting the seats in upcoming parliamentary elections.

Dozens of Afghan politicians and legislators barred from running for parliament due to their alleged ties to armed groups have threatened to hold protest rallies to interrupt the general elections that face a growing risk of deteriorating security in the war-wracked country.

The Taliban have warned the Afghan people against taking part in the elections. So far, dozens of people have been killed in the militant attacks on voter registration centers.

The Taliban rejected earlier this week an Afghan government’s offer for a three-month ceasefire, saying they would continue with attacks to take over the country’s strategic regions.

Speaking on condition of anonymity, two senior Taliban commanders said their leader had rejected Afghan President Ashraf Ghani's offer of a 90-day ceasefire beginning with Wednesday’s Muslim celebration of Eid al-Adha or the feast of sacrifice.

The representatives of the terrorist group have also engaged in negotiations with US authorities recently in the Persian Gulf state of Qatar.

Afghanistan has been gripped by insecurity since the United States and its allies invaded the country to topple Taliban as part of Washington’s so-called war on terror in 2001. Many parts of the country remain plagued by militancy despite the presence of foreign troops.