TEHRAN, August 25 - A black bear wandered into the lobby of a popular Colorado hotel, but it eventually left without getting a room for the night. 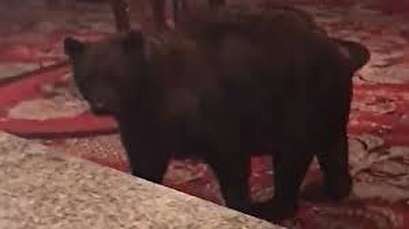 TEHRAN, Young Journalists Club (YJC) -A black bear wandered into the lobby of a popular Colorado hotel, but it eventually left without getting a room for the night.

Reed Rowley, general manager of the Stanley Hotel in Estes Park, said the front desk supervisor was the only one in the room late Wednesday/early Thursday when the bear wandered in through the front door.

The front desk supervisor recorded video of the bear standing on a coffee table and wandering past the front desk.

Rowley said none of the hotel's 300 guests were in any danger from the bear's visit. He said the bear moved some furniture around, but didn't cause any damage.

"It's part of being in the Rocky Mountains, we do have a hotel next to a National Park... wildlife is part of the gig," Rowley told KCNC-TV.

"The bears up here are super clever and once in a while they do figure out a way to poke their heads in," he said.

He said the hotel is working with Colorado Parks and Wildlife to "make sure wildlife and people stay apart and everyone remains safe."

"We want to be really respectful of the wildlife up here... the last thing we want is for any guest to have an encounter with a bear," Rowley said.