TEHRAN, August 26 - The supporter of US-led wars in Iraq and Afghanistan as well as US-backed terror groups in Syria and a hawkish US Republican Senator, John McCain died at his 81. 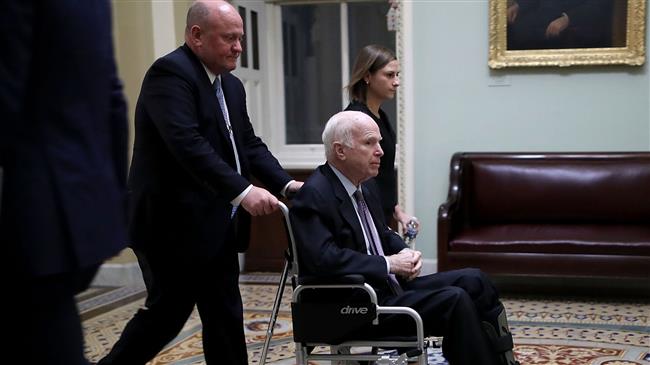 The former US presidential candidate, Vietnam war veteran and prisoner of war had declared back in July 2017, that he had been diagnosed an aggressive brain tumor.

The development came after McCain’s family announced earlier in the week that he was discontinuing treatment.

"With the Senator when he passed were his wife Cindy and their family. At his death, he had served the United States of America faithfully for sixty years," McCain's office said in the statement.

McCain was first elected to office in 1982, when he won a seat in the US House of Representatives from Arizona. Four years later he was elected to the Senate, and he was re-elected five times.

Back in the Senate, McCain heard the call of war again, as American foreign policy was transformed after the September 11, 2001, terror attacks, and he became a forceful proponent of the US use of force overseas.

He backed US interventions in Afghanistan and Iraq. Even when Americans grew tired of war, McCain warned that more troops were needed, demanding a surge in forces that Bush later adopted.

After McCain’s announcement on Friday, Arizona Gov. Doug Ducey, a Republican, lauded the ailing senator as an “American hero” who has always put the country before himself.

Ducey is legally required to fill vacancies in Arizona’s US Senate delegation and will therefore appoint McCain’s replacement. Whoever Ducey chooses will stay in office until 2020.

The governor has so far remained silent on who he has in mind out of respect for McCain and his family. By Arizona state law, he must tap someone of the same party as McCain — meaning a Republican — and he has ruled himself out.

McCain’s junior colleague, Republican Senator Jeff Flake, has already announced that he is retiring, meaning both of Arizona’s Senate seats would have been up for grabs.