TEHRAN, August 26 -Medical teams fighting to stop the spread of an Ebola outbreak in the Democratic Republic of the Congo are facing dangers other than the disease itself as it has spread to areas surrounded by anti-government rebels. 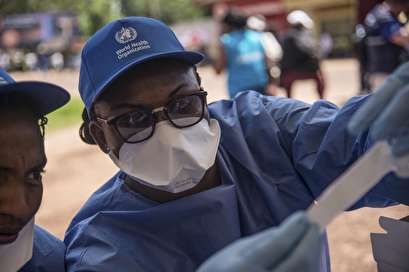 TEHRAN, Young Journalists Club (YJC) -Medical teams fighting to stop the spread of an Ebola outbreak in the Democratic Republic of the Congo are facing dangers other than the disease itself as it has spread to areas surrounded by anti-government rebels.

Peter Salama, World Health Organisation emergencies chief, said in a statement Friday there were 103 confirmed cases and 63 deaths in this latest outbreak, centered in the eastern province of North Kivu.

North Kivu province is home to more than 1 million people displaced amid fighting between the government and militant groups. There also is frequent cross-border trade with Uganda, which could complicate containment of the disease.

Several cases were identified in the crowded urban area of Beni, and officials documented one case in Oicha, a "red zone" city surrounded by the Ugandan insurgent group Allied Democratic Forces. Staff from WHO can move freely within Oicha but getting to and from the city requires armed escorts.

"For the first time really we have a confirmed case ... in an area with high insecurity," Salama said. "It really was the problem we were anticipating and the problem at the same time we were dreading."

Insurgents in the surrounding areas have attacked military personnel, aid workers and civilians and have held priests and government personnel hostage.

Salama said WHO staff is "at risk on a daily basis."

"There are extremely serious security concerns in and around that region," Salama said.

The region's insecurity has also made it difficult to effectively educate people about getting vaccinated against the disease.

The 63 deaths are an increase over numbers reported earlier this month, when the outbreak had killed 37 people in the region. Among the ill were three healthcare workers, two of whom died.