Gas prices could jump ahead of Labor Day

TEHRAN, August 26 -The price at the pump jumped a little more than 10 percent over the last major summer holiday. 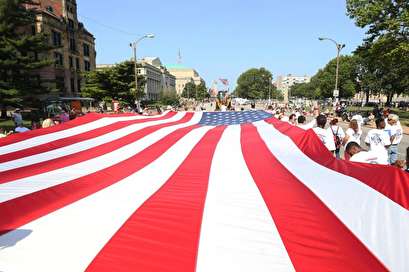 TEHRAN, Young Journalists Club (YJC) -The price at the pump jumped a little more than 10 percent over the last major summer holiday.

One week ahead of the last major summer holiday in the United States, motor club AAA said vacation demand could cause a brief jump in gas prices.

AAA reported a national average retail price of $2.84 for a gallon of regular unleaded gasoline, a fraction of a percent higher than Thursday but more or less the same as one month ago. This Friday marks one week before the Labor Day holiday weekend in the United States when many travelers take to the road for the last summer holiday.

"Tepid demand alongside growing domestic stocks of gasoline, which increased 1.2 million barrels last week, could cause pump prices to dip slightly in the run-up to Labor Day," a briefing from the motor club read. "However, demand is expected to spike around the holiday, leading to a likely, but brief price jump, as drivers take to the nation's roads one last time before fall arrives."

From Aug. 28 to Sept. 4 last year, the national average retail price for a gallon of regular unleaded gasoline increased 12 percent.

Last week, federal data showed that, at 9.4 million barrels, consumer demand for gasoline was about 2 percent less than the same time last year.

Consumer gasoline prices typically decline after the Labor Day holiday. After Sept. 15, refiners start making a winter blend of gasoline, which is less expensive to make because there are fewer processing steps necessary compared to the summer blend.

Prices later this year could spike, however, because of the loss of Iranian oil barrels from the market. U.S. sanctions on Iran's oil sector go into force in November and the market has almost no buffer to compensate for the loss.

The national average price for a gallon of gas on this date last year was $2.35.