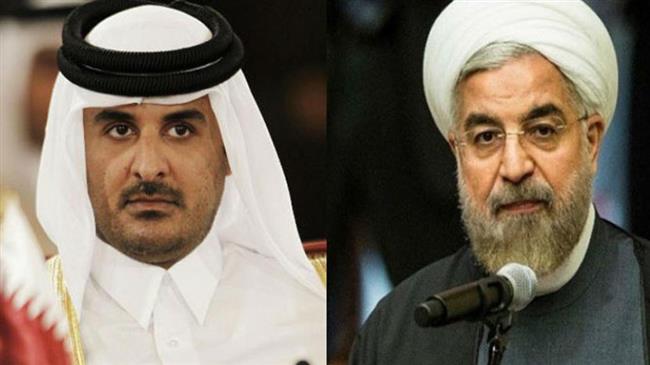 TEHRAN, Young Journalists Club (YJC) - "There are numerous capacities and grounds for the expansion of cooperation between Iran and Qatar in political and economic fields and there is no obstacle in the way of improving joint cooperation," Rouhani said in a telephone conversation with Qatari Emir Sheikh Tamim bin Hamad al-Thani on Sunday.

He added that Tehran would continue to support Doha in the face of illegal sanctions against the Arab country.

Saudi Arabia, the United Arab Emirates (UAE), Bahrain and Egypt cut off diplomatic ties with Qatar on June 5, 2017, after officially accusing it of “sponsoring terrorism.”

Libya, the Maldives, Djibouti, Senegal and the Comoros later joined the camp in ending diplomatic ties. Jordan downgraded its diplomatic relations as well.

Qatar's Foreign Ministry later announced that the decisions to cut diplomatic ties were unjustified and based on false claims and assumptions.

On June 9, Qatar strongly dismissed allegations of supporting terrorism after the Saudi regime and its allies blacklisted dozens of individuals and entities purportedly associated with Doha.

Elsewhere in the phone call, Rouhani pointed to the US unilateral move to withdraw from a 2015 historic nuclear agreement and commended the political stance adopted by European countries, Russia, China, Turkey and Iran's neighboring countries such as Qatar on support for the agreement and their objection to the US illegal sanctions.

"These positions must be complemented with practical measures," the Iranian chief executive pointed out.

The United States has ramped up pressure on Iran after US President Donald Trump withdrew Washington in May from the landmark Iran nuclear agreement, officially known as the Joint Comprehensive Plan of Action (JCPOA), reached between Iran and the P5+1 group of countries in 2015, and decided to re-impose unilateral sanctions against Tehran.

The Qatari emir, for his part, said his country is against the violation of the JCPOA and any intensification of relations between Iran and the US.

The Qatari government always seeks to bolster relations with Tehran and supports the settlement of political issues through peaceful approaches.