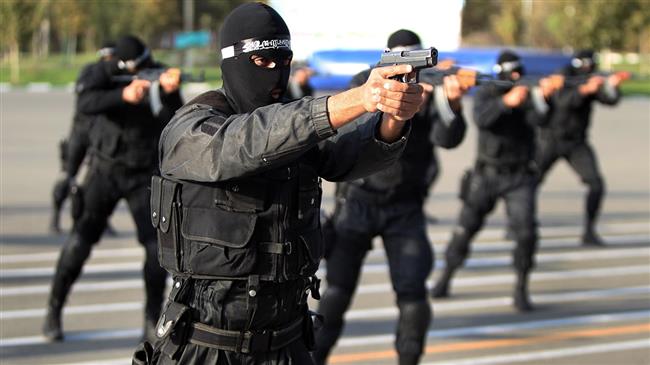 TEHRAN, Young Journalists Club (YJC) -Speaking to the IRIB news agency on Monday, Alavi added that the terrorist outfits were affiliated to hostile countries and arrested through intelligence operations.

One of the terrorist teams had 12 members who were identified and arrested by the Iranian forces, he said.

The Iranian minister added that the other armed terrorist group had entered the country to carry out acts of sabotage and terror, but it was disbanded before making any move.

During armed clashes, two members of this terrorist team were killed and two others arrested, the Iranian intelligence minister noted.

Alavi said a considerable amount of weapons, including Kalashnikov rifles, grenades and communication equipment, was confiscated from the terrorists in the operations.

Earlier this month, Iran discovered and seized a considerable amount of semi-heavy weapons and ammunition in the central province of Kerman.

Kerman Prosecutor General Dadkhoda Salari said on August 1 that the large arms cache had been smuggled into the country through eastern borders for terrorist attacks.

Over the past years, Iranian security forces and border guards have engaged in clashes with terror groups, many of whom cross the country's borders with Pakistan and Iraq to carry out attacks inside the country.

Iranian security forces in June arrested 27 members of a terrorist group before they could carry out any acts of terror in the country.

According to a statement by Iran’s Intelligence Ministry, Iranian security forces managed to identify and arrest the terrorists, who were planning to create insecurity and carry out acts of terror in the capital, Tehran, and some other cities during the holy month of Ramadan (May 17-June 14) and the International Quds Day, which was observed on June 8.

Iran’s security forces also disbanded in January a local of the Mujahedin-e Khalq Organization (MKO) terrorist group, which had carried out acts of sabotage during protests in some Iranian cities over rising prices and economic problems.

According to Lorestan province’s intelligence office, the MKO-affiliated terrorists were identified and arrested in the city of Borujerd.

The Iranian intelligence minister said in January that the country's security forces will soon give a "crushing response" to terrorists and groups hostile to the Islamic Republic operating in the region.