TEHRAN, August 28 - The presidents of Iran, Russia, and Turkey will hold their third round of tripartite summit in Iran next week in an attempt to find ways to end the ongoing crisis in Syria, Turkish state television says. 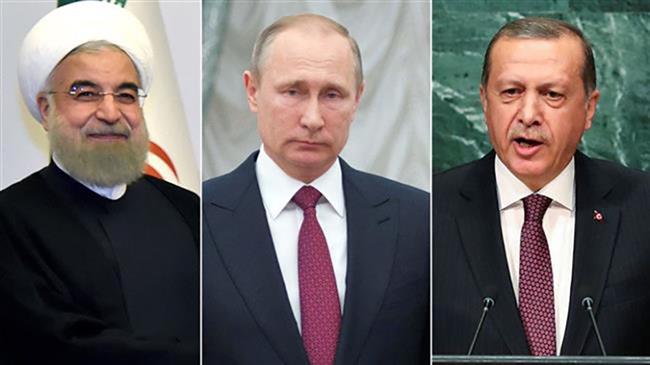 Private NTV television also said the summit would be held in the northwestern Iranian city of Tabriz as Iran, Russia and Turkey are acting as guarantor states for a peace process in Syria.

The three presidents have previously held summits in the Russian resort city of Sochi in November 2017 and in the Turkish capital Ankara in April.

At the end of their meeting in Ankara on April 4, the Iranian, Russian and Turkish presidents reaffirmed their commitment to work toward achieving a sustainable ceasefire between warring sides in Syria and bringing peace and stability to the war-torn Arab country.

Rouhani, Putin and Erdogan, “reaffirmed their determination to continue their active cooperation on Syria for the achievement of lasting ceasefire between the conflicting parties and advancement of the political process envisaged by UN Security Council Resolution 2254,” said a joint statement issued at the end of the summit.

Addressing their summit in Sochi on November 22, Rouhani lauded the defeat of the Daesh terror group in Iraq and Syria, but underlined the need for continued battle against terrorism until the eradication of all Takfiri terrorist outfits in Syria.

He blamed foreign interference for the conflict in Syria, saying certain countries claiming to be advocates of democracy wreaked havoc in the Arab country to achieve their goals in the region.

Erdogan had previously said that he planned to host a summit in Istanbul on September 7 on the crisis in Syria with Putin, French President Emmanuel Macron and German Chancellor Angela Merkel.

However, press reports over the last weeks have indicated that such a meeting was increasingly unlikely and was set to be replaced by the latest three-way summit in Iran.

A UN spokeswoman said on Friday that United Nations Special Envoy Staffan de Mistura had invited Iran, Russia and Turkey to talks due to be held in Geneva next month on forming Syria's Constitutional Committee.

"Special Envoy de Mistura continues his consultation on the establishment of a Syrian-led, Syrian-owned and UN facilitated Constitutional Committee within the framework of the Geneva process and in accordance with Security Council Resolution 2254 (2015)," Alessandra Vellucci said at a news conference.

In a meeting with Syrian President Bashar al-Assad in Damascus on Sunday, Iran's Defense Minister Brigadier General Amir Hatami hailed the steadfastness of the Syrian people and government forces in their battle against terrorism, expressing confidence that they will achieve a final victory in this path.

"Not only regional people, but people around the world are indebted to the fight carried out against terrorists in Syria," Hatami said.