Spanish prime minister promises to back dialogue in Venezuela

TEHRAN, August 28 - Pedro Sanchez, speaking on his first tour of Latin America since becoming Spain's prime minister in June, promised to support any effort to use dialogue in Venezuela to end an economic and political crisis that he said had deeply worried him. 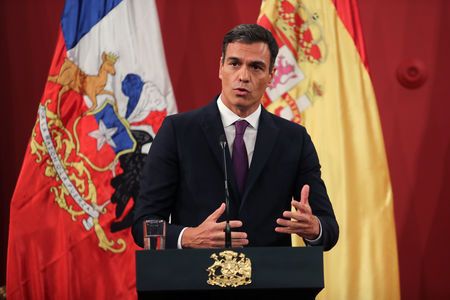 TEHRAN, Young Journalists Club (YJC) - Sanchez kicked off his four-nation Latin American trip on Monday in Chile, one of several countries in the region where Venezuelans are fleeing to escape hyperinflation and shortages of basic goods under Socialist President Nicolas Maduro.

"It's a crisis that's been growing for some time in Venezuela and we of course look at it with deep concern," Sanchez said at a news conference in Santiago with Chile's President Sebastian Pinera, a fierce critic of Maduro.

But Sanchez stressed that Spain, which once colonized most of Latin America, had no intention of interfering in internal affairs in the region.

"Venezuela has to start a dialogue with itself...to find a solution to this political crisis.

And of course, the international community must accompany that dialogue," Sanchez said. "I guarantee Spain will be very active in that."

Several countries in Latin America, including Chile, Peru, Mexico, Argentina and Brazil, have called on Maduro to enact democratic reforms and accept international humanitarian aid to stem a growing exodus of Venezuelans across the region.

On Friday, the United Nations migration agency said the situation was building toward a "crisis moment" comparable to events involving refugees in the Mediterranean.

In recent weeks, Ecuador and Peru have tightened their entry requirements for Venezuelans, and an angry mob in Brazil drove a group of migrants back across the border.

"I think what's important is not to forget the Venezuelans, those who emigrate as a consequence of Venezuela's economic and political crisis," Sanchez said.

Sanchez will travel to Bolivia on Tuesday before visiting Colombia and Costa Rica.

Share to
Related News
Police and protesters face off in Bolivia
Bolivia must give up demand for access to sea through Chile: Pinera
Catalan government to relaunch campaign to split from Spain
Equinor identifies Brazil as a core area of focus
Tags
spain ، prime minister ، venezuela
Your Comment