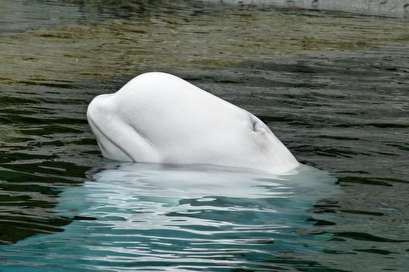 Beluga whales and narwhals experience menopause, just like humans, according to a new study.

Humans and whales are the only animals known to go through menopause. Scientists have previously shown killer whales and short-finned pilot whales also experience menopause.

Menopause is the cessation of menstrual periods, leaving the female unable to bear children.

"For menopause to make sense in evolutionary terms, a species needs both a reason to stop reproducing and a reason to live on afterwards," Sam Ellis, researcher at the University of Exeter, said in a news release.

"The reason to continue living is that older females are of great benefit to their offspring and grand-offspring," Ellis said. "For example, their knowledge of where to find food helps groups survive."

Through decades of research, scientists have been able to document living killer whales experiencing menopause. Scientists haven't been studying belugas and narwhals for quite as long. But researchers were able to identify dormant ovaries in deceased beluga and narwhal females.

As early humans maintained large groups organized by familial relations, and as humans continued to live longer, females found themselves surrounded by increasing numbers of relatives. Though no longer capable of bearing children, elderly females among early humans were still able to assist in raising young and sharing knowledge.

"It's hard to study human behavior in the modern world because it's so far removed from the conditions our ancestors lived in," said researcher Darren Croft. "Looking at other species like these toothed whales can help us establish how this unusual reproductive strategy has evolved."