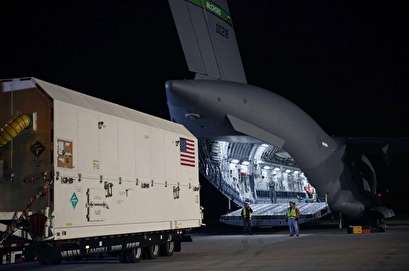 The satellite was shipped from Buckley Air Force Base in Colorado to the Cape on August 20 on an Air Force C-17 cargo aircraft, Lockheed Martin announced on Monday.

GPS III will have three times better accuracy and up to eight times improved anti-jamming capabilities, according to Lockheed. The new L1C civil signal also will make it compatible with other international global navigation satellites.

Lockheed has been selected to build the first 10 of satellites for a new GPS constellation. The first in the series is being prepared for its scheduled launch later this year, and the second has been declared ready for launch by Lockheed, though it has not been delivered to the Air Force yet.

The third satellite is expected to be ready early next year -- Lockheed reports it has already completed its construction -- and the company has the fourth, fifth, sixth and seventh satellites at varying stages of progress. To date, more than 90 percent of parts and materials for all 10 satellites under contract have been received.

Lockheed has also submitted a proposal to build up to 22 additional satellites to enhance capabilities to the GPS constellation.

"Once on orbit, the advanced technology of this first GPS III space vehicle will begin playing a major role in the Air Force's plan to modernize the GPS satellite constellation," Johnathon Caldwell, Lockheed Martin program manager for Navigation Systems, said in a statement.

"We are excited to start bringing GPS III's new capabilities to the world and proud to continue to serve as a valued partner for the Air Force's positioning, navigation and timing mission systems," Caldwell said.