TEHRAN, August 28 -Iran has opened its largest wind farm, marking a turning point in its bid to procure electricity from renewable sources such as wind power, solar and hydropower. 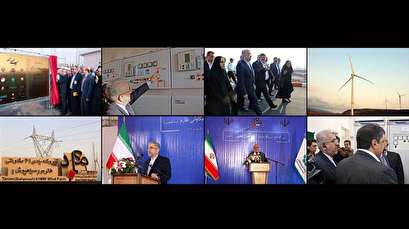 TEHRAN, Young Journalists Club (YJC) -Iran has opened its largest wind farm, marking a turning point in its bid to procure electricity from renewable sources such as wind power, solar and hydropower.

“The wind farm in Tarom Sofla has been built in one year, using the latest technology in the world, at a cost of 86 million euros,” the report said.

Energy Minister Reza Ardekanian attended the opening of the farm which is estimated to forestall the release of 110,000 metric tons of greenhouse gases a year.

Iran has the Middle East’s most comprehensive plan to harness renewables and streamline the country’s energy mix which mainly relies on grid supplied fossil power.

More than 250 companies have signed agreements to add and sell power from about 5,000 MW of new renewables in Iran.

Among them is Dutch energy firm Global Renewables Investments (GRI) which is about to build up solar and wind farms that could produce up to 1,700 MW of electricity.

Norway's Saga Energy has said its 2.5 billion-euro plan to build 2,000 MW of new solar energy capacity in Iran is still on track.

Norway’s Scatec Solar has also been in talks to generate 120 megawatts of solar power in Iran, which would rise to 500 MW later.

The Oslo-listed firm’s CEO Raymond Carlsen has said the initial project under discussion would cost $120 million per 100 MW installed.

UK renewables investor Quercus, however, halted earlier this month a deal worth over half a billion euros to build and operate a 600 MW solar farm in Iran.

According to Deputy Energy Minister Homayoun Haeri, Iran’s renewable energy capacity will grow to 1,000 MW in the current Persian year which ends in March 2019.

The country currently has 400 MW of renewable capacity in place and is the most advanced in its development of renewable energy in the Middle East, mostly due to its past investments in hydropower schemes.

Iran, however, is pushing the envelope on its green fleet efforts to establish other greener capacities ranging from wind power to solar farms and burning biomass and waste to heat homes.