TEHRAN, August 28 - About half of Americans want the US Congress to begin impeachment proceedings against President Donald Trump, according to a new poll. 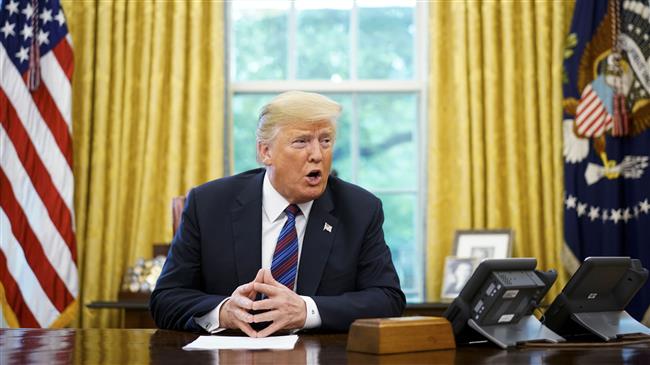 Several Democratic Party lawmakers have publicly supported bringing impeachment proceedings against Trump. But senior Democrats, including Senator Chuck Schumer and Representative Nancy Pelosi have been wary of the prospect.

Cohen's campaign finance law violations stem from hush money payments the lawyer arranged during the 2016 US presidential campaign to women who allegedly had affairs with Trump.

Cohen said he made the payments at the direction of “a federal candidate for office,” seemingly implicating Trump.

A majority, 64 percent, of Americans believe that Trump ordered Cohen to make the payments.

Trump is also under growing pressure after a guilty verdict for his former campaign manager Paul Manafort.

Efforts are underway on Capitol Hill to impeach Trump as soon as possible.

“The president has to realize that the countdown to impeachment has already started,” said congressman Al Green from Texas in a interview this week.

In his first public acknowledgment of a possible impeachment, Trump claimed he was doing a great job, so he would not be impeached.

Why would Congress impeach "somebody who has done a great job,” Trump told Fox News on Thursday commenting about his impeachment.

“If I ever got impeached, I think the market would crash. I think everybody would be very poor,” he warned the people of the US.

Trump claimed that if he were to be impeached, the US economy would crash and the stock market would plunge to "numbers that you wouldn't believe, in reverse."