TEHRAN, August 29 -Democrat Andrew Gillum and Republican Ron DeSantis each defeated the establishment picks in their respective gubernatorial primaries in Florida and will face each other in November. 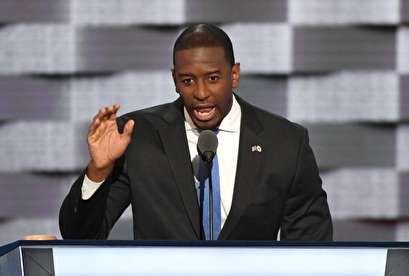 TEHRAN, Young Journalists Club (YJC) -Democrat Andrew Gillum and Republican Ron DeSantis each defeated the establishment picks in their respective gubernatorial primaries in Florida and will face each other in November.

Gillum, the Mayor of Tallahassee, will become the first black candidate of a major party to run for governor in the Sunshine State. The 39-year-old had been trailing in the polls for months behind former congresswoman Gwen Graham, whose father Bob Graham was a former governor and U.S. Senator of Florida, and Miami Beach Mayor Philip Levine.

But with the help of an enthusiastic progressive base and endorsements from national figures such as Sen. Bernie Sanders, I-Vt., and celebrities like actress Gabrielle Union, Gillum surged in the polls this week and edged Graham 34 percent to 31 percent., according to The New York Times voting numbers.

Gillum finished strong in each of Florida's major cities, including Tampa, Orlando, Jacksonville and his home city of Tallahassee. He also handily beat Graham in the state's two largest counties -- Miami-Dade and Broward -- by winning more than twice the amount of votes she received there.

Levine, thought to have been the second most-popular candidate of the three for several weeks, finished a distant third with about 20 percent of the vote and lost his home county of Miami-Dade to Gillum by nearly 10,000 votes.

On the Republican side, DeSantis, a U.S. congressman from the Jacksonville area, stomped Adam Putnam, a former congressman and current Commissioner of Agriculture in Florida, with more than 56 percent of the vote.

Putnam had long been considered the favorite to win the GOP primary with state party backing and big donations from the biggest corporate entities in the state, including supermarket chain Publix, U.S. Sugar, Florida Power & Light and Disney.

But in polls over the past two months, DeSantis began to pull away from Putnam with the help of a strong endorsement from President Donald Trump, who rallied for him in Florida this month.

DeSantis has also been a regular face on Fox News. According to Politico, DeSantis appeared on the network more than 100 times this year.

"That's a lot of exposure," Rick Wilson, an MSNBC contributor and veteran GOP ad maker, told Politico. "Fox News has become a silo of the Fox/Trump media ecosystem, and DeSantis is on the list as one of their favorites."