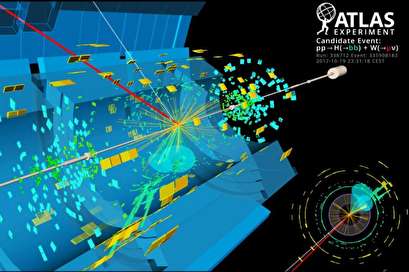 Models predict Higgs boson particles decay into two bottom quarks 60 percent of the time. Bottom quarks, or b quarks, are the second heaviest of the six types of quarks.

Pairs of photons produced by decaying Higgs boson particles is much easier spot among the "noise" produced by high-energy particle collisions.

During experiments, scientists regularly witnessed the Higgs boson decaying into photons, tau-leptons, and W and Z bosons, but b quarks proved hard to see.

To isolate the link between decaying Higgs boson particles and pairs of bottom quarks, scientists combined the observations of the two particle detectors at CERN's Large Hadron Collider, ATLAS and CMS.

Physicists applied complex statistical analysis to the combined dataset. According to CERN, the analysis methods revealed "the decay of the Higgs boson to a pair of bottom quarks with a significance that exceeds 5 standard deviations."

"This observation is a milestone in the exploration of the Higgs boson," Karl Jakobs, spokesperson of the ATLAS collaboration, said in a news release. "It shows that the ATLAS and CMS experiments have achieved deep understanding of their data and a control of backgrounds that surpasses expectations."

Scientists working on the ATLAS experiment have now witnessed Higgs bosons decay into all of the heavy quarks and leptons predicted by particle physics models, including the Standard Model.

"Since the first single-experiment observation of the Higgs boson decay to tau-leptons one year ago, CMS, along with our colleagues in ATLAS, has observed the coupling of the Higgs boson to the heaviest fermions: the tau, the top quark, and now the bottom quark," said Joel Butler, spokesperson of the CMS collaboration. "The superb LHC performance and modern machine-learning techniques allowed us to achieve this result earlier than expected."

Researchers detailed their breakthrough in a scientific paper, published online this week. Scientists previously presented their findings at the 2018 International Conference on High Energy Physics in Seoul, South Korea.

Scientists hope their latest feat will pave the way for the detection of even more elusive decays, as well as the exploration of physics beyond the Standard Model.

"The analysis methods have now been shown to reach the precision required for exploration of the full physics landscape, including hopefully new physics that so far hides so subtly," said Eckhard Elsen, director of research and computing at CERN.