German police under fire amid far-right violence in Chemnitz

TEHRAN, August 29 -Police in eastern Germany have been accused of stoking tensions by leaking to far-right groups an arrest warrant containing the names and addresses of two men suspected of stabbing a man to death in an incident that sparked the worst neo-Nazi rioting in the country for decades. 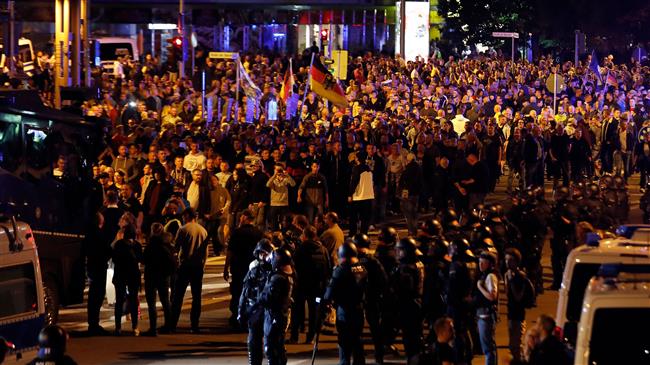 TEHRAN, Young Journalists Club (YJC) - Authorities in the state of Saxony, where the violence-hit city of Chemnitz is located, on Wednesday confirmed that the leak for the murder suspect sparked violent anti-foreigner protests.

"It's unacceptable that some police officers think they can leak things like this even though they know they're committing an offence."

"To hear that the arrest warrant was probably leaked by the police to right-wing extremist circles means that we have a huge problem to deal with. This is an egregious occurrence."

Photos of the warrant were posted on social media by Lutz Bachmann, founder of the anti-Muslim Pegida movement, as well as by Pro Chemnitz, which organized recent demonstrations.

A police spokeswoman confirmed the authenticity of the arrest warrant to the German media. “The document is real,” she said. “We have already instigated a judicial inquiry ... regarding the violation of official secrets.”

National Interior Minister Horst Seehofer called the release "completely unacceptable." Prosecutors said they had launched an investigation into the matter.

Following the fatal stabbing on Sunday of a 35-year-old German man allegedly by a Syrian and an Iraqi, thousands of protesters marched in Chemnitz for two straight days. Some angry demonstrators chased down people they believed were refugees.

The demonstration attracted around 6,000 people and 1,500 counter-protesters and quickly turned violent with far-right groups breaking off into smaller mobs and hunting foreigners through the city streets in riots.

Police in Chemnitz are under fire for being inadequately prepared for far-right protests in the city.

The eastern state of Saxony has long been a hotbed of anti-refugee sentiment. The far-right Alternative for Germany party received almost a quarter of the votes in Chemnitz last year.