The Russian Defense Ministry says the country’s naval forces will hold eight days of military exercises in the Mediterranean Sea starting from September 1, amid escalating tensions with Washington. 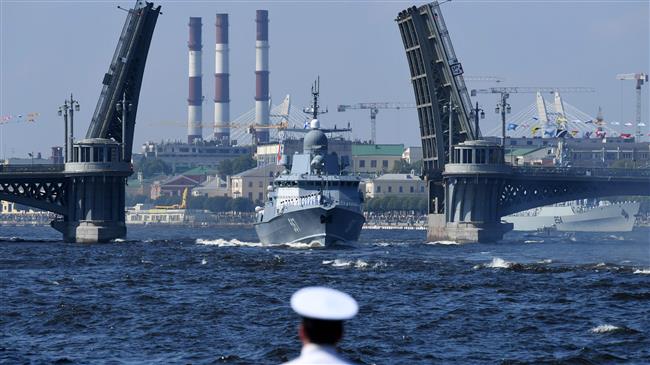 TEHRAN, Young Journalists Club (YJC) - The “large-scale” naval drills will involve 25 warships and submarines of the Northern, Baltic and Black Sea Fleets and the Caspian Flotilla, and 30 aircraft of long-range, military transport and naval aviation types, the ministry said.

The aircraft include the strategic Tu-160 missile-carrying bombers, the Tu-142MK and Il-38 anti-submarine warfare planes, Su-33 fighter jets and Su-30SM aircraft of naval aviation, the TASS news agency quoted the ministry as saying.

The war games, due to be held on September 1-8, will be aimed at training the Russian Armed Forces, the Russian Defense Ministry said.

The drills will come as the Syrian army prepares to launch a full-scale offensive against terrorists in the northwestern province of Idlib.

The United States has also warned it would respond to a chemical weapons attack and that the attack would be stronger than those conducted by American, British and French forces back in April.

On April 14, the United States, Britain and France carried out a string of airstrikes against Syria over a suspected chemical weapons attackagainst the city of Douma. The strike came one week after an alleged gas attack on the Damascus suburb town of Douma.

Syria surrendered its stockpile of chemical weapons in 2014 to a joint mission led by the United States and the Organization for the Prohibition of Chemical Weapons (OPCW), which oversaw the destruction of the weaponry.

The Syrian government has consistently denied using chemical weapons over the course of the foreign-backed militancy, which began to grip the country in 2011.