Trump exit threat scenario not good for anyone: WTO

TEHRAN, August 31 - The World Trade Organization (WTO) has hit back at a threat made by President Donald Trump of the United States that Washington would withdraw from the organization, telling other members not to panic. 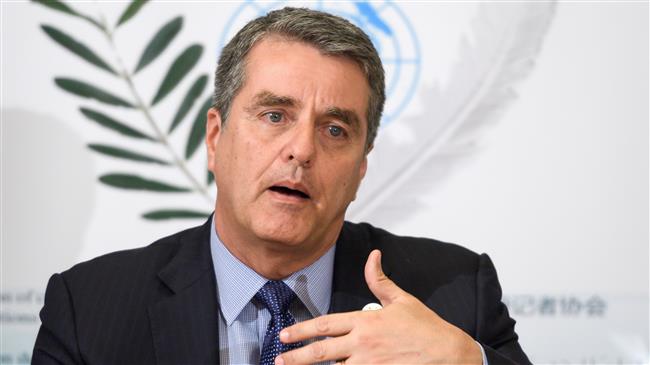 TEHRAN, Young Journalists Club (YJC) - Roberto Azevedo, the WTO’s director general, said on Friday that if the US were to leave the institution, such a move would cause chaos and disruption for American firms across the globe.

Trump threatened on Thursday that if the WTO did not "shape up," Washington would withdraw.

However, the WTO chief said the "scenarios are not going to be good for anyone."

Azevedo said there should be “no panic” over Trump’s threat, media reported on Friday. He said the US president's comments on Thursday were nothing new and a reiteration of earlier comments regarding the WTO.

"The US concerns about areas in the WTO that they would like to improve are not new. And I think what he said yesterday is consistent with what they have expressed before."

Many WTO members, he said, were now talking about improvements, which was a good development. "Everyone that would like to see improvements in the WTO is very welcome to present their ideas and their suggestions to improve the organization, sit down with the other members and get the job done."

The Geneva-based organization, which was designed to lower tariffs and promote free trade between countries, was established in 1995. The rules and regulations of the WTO are formed on the basis of a "consensus" between all its 164 members.