TEHRAN, August 31 - At least 240 Palestinians have been injured in attacks by Israeli forces on a protest held in the Gaza Strip near the fence between the besieged enclave and the occupied Palestinian territories. 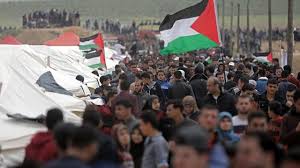 The spokesman added that 82 of the injured were transferred to hospital.

A 10-year-old boy and a female medic, Shorouk Abu Mesameh, were in critical condition.

Tensions have been running high near the fence since March 30, which marked the start of a series of protests dubbed “The Great March of Return.” Palestinian protesters demand the right to return for those driven out of their homeland.

Israeli fire has taken the lives of more than 170 Palestinians since March 30.

Israel has also launched several wars on the Palestinian sliver, the last of which began in early July 2014 and ended in late August the same year. The Israeli military aggression killed nearly 2,200 Palestinians and injured over 11,100 others.