US may allow schools to use federal money to buy guns

TEHRAN, September 01 -US Education Secretary Betsy DeVos says she will not block states if they seek to use federal grants to purchase guns for schools, amid rising gun violence at American schools. 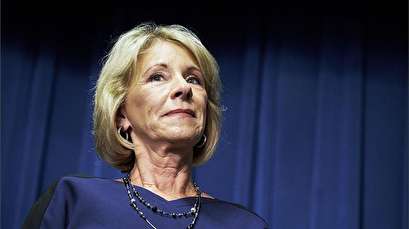 TEHRAN, Young Journalists Club (YJC) -US Education Secretary Betsy DeVos says she will not block states if they seek to use federal grants to purchase guns for schools, amid rising gun violence at American schools.

“I have no intention of taking any action concerning the purchase of firearms or firearms training for school staff under the [Elementary and Secondary Education Act],” DeVos said on Friday in a letter to Rep. Bobby Scott, the top Democrat on the House Education Committee.

Democratic lawmakers and some education groups have called on the administration of President Donald Trump not to allow federal education grants to be used for firearms after reports said last week that the Education Department might allow this.

Education Department officials have argued that states and school districts already have the authority to purchase firearms and use federal education grants for this purpose.

In her letter, DeVos said that states have “substantial flexibility” in deciding how they spend the money from the about $1 billion Student Support and Academic Enrichment Grants.

She said that Congress did not “authorize me or the Department to make those decisions” about how school use the money.

DeVos added that she would “not legislate via fiat from the Department.”

The official said that she would "not take any action that would expand or restrict the responsibilities and flexibilities granted to State and local educational agencies by Congress."

Gun violence in the US has reached unprecedented levels as school campuses are now becoming the main target for shooters.

This year, there have already been 23 school shootings where someone was hurt or killed. That averages out to more than 1 shooting a week.

The most fatal school shooting of this year took place on May 18 in Santa Fe, Texas, after a teenager allegedly used a shotgun to kill 10 people and wound 10 others.

The United States loses around 33,000 people to gun violence every year.

Mass shootings at US schools are rising rapidly, killing more people in the last 18 years than in the entire 20th century, according to a study published in April by researchers at Clemson University.

The report in the Journal of Child and Family Studies tallied mass shootings -- events when at least one shooter intentionally killed or injured at least four others -- and death tolls at US schools for children and teens aged five to 18, going back to 1940.