TEHRAN, September 01 -US President Donald Trump has lashed out at officials at the Federal Bureau of Investigation (FBI) and Department of Justice (DOJ) for being "out to lunch". 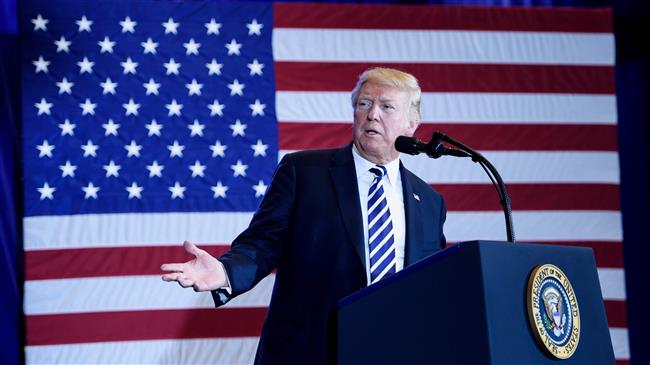 TEHRAN, Young Journalists Club (YJC) -In a series of tweets on Saturday, Trump slammed FBI and DOJ officials for being "completely out to lunch" when it came to fighting corruption.

His tweets evolved around a report by Judicial Watch, a conservative watchdog group, regarding the Foreign Intelligence Surveillance Court (FISA) warrants for surveillance of a former Trump campaign aide.

Trump quoted from a Friday night appearance on Fox's Hannity program by President of Judicial Watch, Tom Fitton, who was discussing wiretap warrants on a former foreign policy adviser to the Trump campaign, Carter Page.

" 'It is astonishing that the FISA courts couldn’t hold hearings on Spy Warrants targeting Donald Trump. It isn’t about Carter Page, it’s about the Trump Campaign. You’ve got corruption at the DOJ & FBI,' " Trump wrote on Twitter, quoting  Fitton.

" 'The leadership of the DOJ & FBI are completely out to lunch in terms of exposing and holding those accountable who are responsible for that corruption,' ” he added.

Trump has suggested in the past that the FBI and DOJ were trying to frame him, and his own attorney general was too afraid to defend him.

Trump is known to maintain a grudge against Sessions for recusing himself from an investigation by the Justice Department’s Special Counsel Robert Mueller into possible collusion between the Trump campaign and Russia.

The business mogul-turned-president has repeatedly condemned the Mueller Russia probe.

Share to
Related News
Sessions limits US oversight of local police before being ousted
FBI tried to flip Russian oligarch into informant: Report
US prepared initial list of Syria targets for possible strike: Report
US may allow schools to use federal money to buy guns
US cuts UNRWA funding
Tags
Trump ، people ، corruption
Your Comment