TEHRAN, September 02 - A Saudi-led coalition in Yemen said on Saturday it accepted that an air attack last month that killed dozens of people, including children traveling on a bus, was unjustified and pledged to hold accountable anyone who contributed to the error. 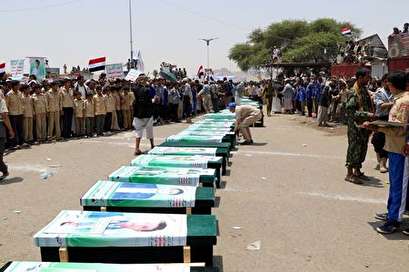 TEHRAN, Young Journalists Club (YJC) - The rare concession follows mounting international pressure, including from allies, to do more to limit civilian casualties in a 3-1/2 year civil war that has killed more than 10,000 people and pushed the already impoverished country to the brink of famine.

The Western-backed alliance fighting Houthis in Yemen said at the time that the Aug. 9 air strikes at a market in Saada province had targeted missile launchers used to attack southern Saudi Arabia a day earlier.

The Joint Incident Assessment Team (JIAT), an investigative body set up by the coalition, said on Saturday that the strikes had been based on intelligence indicating the bus was carrying Houthi leaders, a legitimate military target, but delays in executing the strike and receiving a no-strike order should be further investigated.

"The team believes that the coalition forces should immediately review the application of their rules of engagement to ensure compliance," he added.

The coalition later announced that it accepted those findings and pledged to hold accountable anyone who was proven to have made a mistake, Reuters reported.