TEHRAN, September 02 - Japanese Prime Minister Shinzo Abe expressed confidence in improving ties with China and said the countries' relationship had returned to a "normal track", in a newspaper interview published on Sunday. 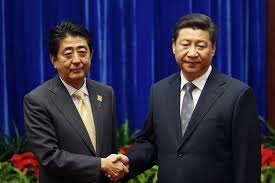 TEHRAN, Young Journalists Club (YJC) - Abe, who is expected to visit China at the end of October, was also quoted as saying he hoped to invite President Xi Jinping to Japan in the future.

His comments came amid intensifying U.S. trade pressure on Beijing and Tokyo that has raised concerns about protectionism and its impact on the global economy.

"Premier Li Keqiang visited Japan in May and the Japan-China relationship has completely returned to a normal track," Abe told the Sankei newspaper.

Japan's finance minister expressed similar optimism on Friday, saying the current round of financial dialogue with China was "extremely good", and that both sides agreed to maintain cooperation in macro-economic policies and measures.

U.S. President Donald Trump has repeatedly threatened to impose tariffs as a key part of his economic message, singling out the U.S. auto sector trade deficit with Germany and Japan.

In his interview, Abe said he shared with Trump the larger goal of expanding trade and investment that would benefit both countries, but reiterated that he would not prioritize friendship over national interests in any discussions over trade.