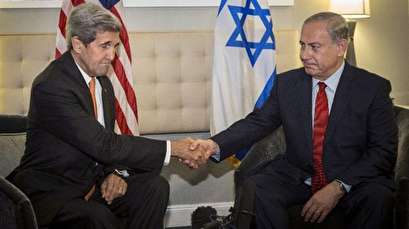 According to excerpts released by a Washington newsletter, Kerry began losing trust in Netanyahu in 2014 during Israel’s last war on Gaza, when he says Netanyahu began leaking to the press against the US government.

An “element of personal trust had been lost” at that time, he writes. “‘We were in the middle of negotiating [a ceasefire] based on your input. Now I see it in the press? This is outrageous,’” Kerry recalled telling Netanyahu.

“‘The humanitarian ceasefire was your idea. And now you leak this document to make it sound like I am trying to advance Hamas’s position?” he said.

The book, titled Every Day is Extra, catalogs Kerry’s tenure at the State Department throughout Obama’s second term in office, including his efforts to negotiate a nuclear deal with Iran.

Kerry writes that Netanyahu gave him two reasons why he was skeptical about entering "peace" talks with the Palestinians.

“I’m willing to give this effort a try,” he allegedly told Kerry, ”but there are two things you should know.

“First, everyone in this region lies all the time,” he said, and “second, the most I can do may be less than the least Abbas could ever accept.”

In the book, he tells about how Netanyahu would withhold concessions during “peace” talks.

“Bibi’s attitude was ‘I’m open to solving this problem if I can have all my needs met.’ That included his political needs with his coalition,” he writes.

As an instance, Kerry explains how Netanyahu would insist on a permanent Israeli military presence in the occupied West Bank by rejecting a plan that would have required a gradual withdrawal of the Israeli troops.

“It was now clear to all of us that Bibi was not interested in actually addressing the security questions in a way that could allow for the eventual withdrawal" of the Israeli military, Kerry recalls.

‘Hitting US below belt’

Kerry also writes about how the Israeli premier was trying to adversely influence the course of the US negotiations with Iran and others that led to the conclusion of a landmark nuclear deal.

He says Netanyahu acted against the White House’s wishes by addressing Congress to vilify the deal on March 3, 2015.

Kerry writes that he was “disappointed in him… I thought we deserved better than a speech that hit below the belt.”