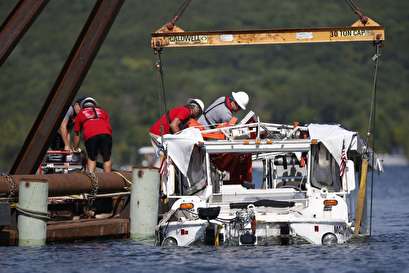 The fatal sinking of the Ride the Ducks amphibious tour boat in July killed 17 people, including nine members of a single family.

"This tragedy should not have happened," Hawley said in a statement.

The lawsuit said the defendants have "been on notice for decades of ongoing safety hazards that posed a present and deadly danger to every person who boarded a duck boat. Defendants kept that information from passengers and made false promises, fraudulent statements, and misrepresentations to consumers that safety was a top priority when in actuality it was their own profits."

Hawley said his hope is the lawsuit will ensure "unsafe duck boats and companies who put profits ahead of safety will not continue to operate."

The captain of the sunken boat along with another captain whose duck boat made it to shore safely that day are part of a criminal lawsuit, which accuses them of operating the vessels in a manner that endangered lives as they took the boats on the water where they battled heavy winds and strong waves.

The National Transportation Safety Board, which is conducting its own investigation, said the captain of the sunken boat checked the weather reports and discussed safety procedures prior to the trip.

The boat's certificate of inspection, released by the U.S. Coast Guard, indicated it wasn't supposed to operate in water if winds in the area reached 35 mph or if waves were higher than 2 feet.