US military can intervene in Venezuela: Senator Rubio

TEHRAN, September 02 - The US military can take necessary actions to remove Venezuelan President Nicolas Maduro from power as his government has become a threat to US national security, says Republican Senator Marco Rubio. 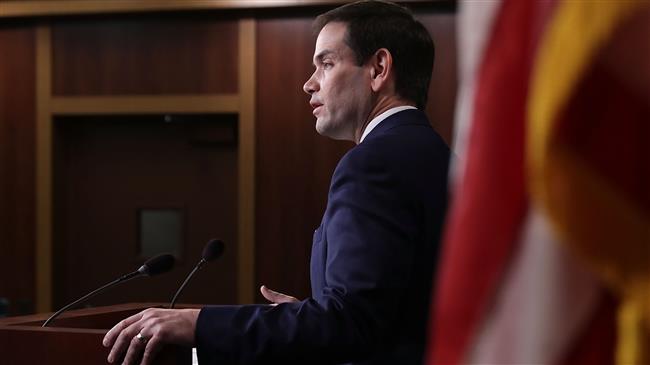 TEHRAN, Young Journalists Club (YJC) -In an interview with Univision, an American Spanish-language TV network, Rubio, who is a vocal opponent of Maduro, said a military intervention by Washington was not out of question.

The 55-year-old Maduro, who took power in 2013 after the death of Hugo Chavez, has survived massive anti-government protests during the past two years.

Earlier this year, he managed to win a second six-year term. The president has since warned of foreign plots against his country, accusing the opposition of seeking to topple his socialist government with support from Washington.

In recent months, the US has sanctioned dozens of top Venezuelan officials, including Maduro, over allegations of human rights abuses, drug trafficking and the erosion of democratic safeguards.

It was reported in July that US President Donald Trump had even considered invading the South American country last year, asking his advisers about the possibility of a “military option” against oil-rich Venezuela.

Additionally, Trump raised the issue with Colombian President Juan Manuel Santos and then brought it up again during talks with leaders of four Latin American countries at the United Nations General Assembly in September last year.

In May, Rubio accused Maduro of being a “dictator” and, under his watch. The situation in Venezuela was gets worse and worse, right here in our own hemisphere.”

Venezuela, which sits atop the world’s largest oil reserves, has been struggling with a worsening economic situation during the past years, causing civilian cross-border journeys into Colombia to purchase basic commodities and foodstuffs.

Maduro says Washington’s plots against him are part of a wider offensive against Latin American leaders defying the US hegemony.