Firefighters try to save relics as fire engulfs Rio museum

TEHRAN, September 03 - A huge fire engulfed Brazil's 200-year-old National Museum in Rio de Janeiro, lighting up the night sky with towering flames as firefighters and museum workers raced to save historical relics from the blaze. 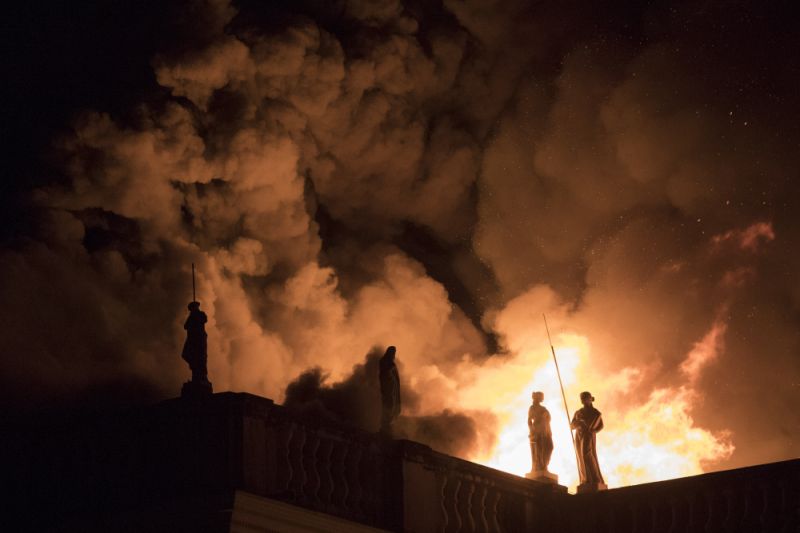 TEHRAN, Young Journalists Club (YJC) - The esteemed museum, which houses artefacts from Egypt, Greco-Roman art and some of the first fossils found in Brazil, was closed to the public at the time of the fire, which broke out at 7:30 p.m. Sunday local time, it said in a statement.

There were no reports of injuries, the museum said, and it wasn't immediately clear how the fire began.

Roberto Robadey, a spokesman for the fire department, said 80 firefighters were battling the blaze and that by midnight local time it was "just about under control" and should be out within a few hours.

President Michel Temer called it "a sad day for all Brazilians."

"Two hundred years of work, investigation and knowledge have been lost," Temer said in a statement.

According to its website, the museum has a vast collection related to the history of Brazil and other countries, and that many of its collections came from members of Brazil's royal family.

Robadey said firefighters got off to a slow start fighting the blaze because the two fire hydrants closest to the museum were not functioning. Instead, trucks had to be sent to get water from a nearby lake.

But he added that some of the museum's pieces had been spared.

"We were able to remove a lot of things from inside with the help of workers of the museum," Robadey told Globo News.

Connected to the Federal University of Rio de Janeiro, the museum has expositions that include anthropology, archaeology and paleontology, among others.

"Everybody wants to be supportive now. We never had adequate support," he said.