Iran will continue support for Syria's fight against terrorism: Zarif 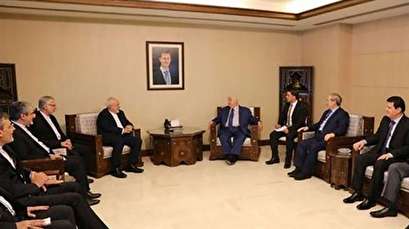 Zarif made the comments in a meeting with Syrian Foreign Minister Walid al-Muallem in Damascus on Monday ahead of a planned summit of Iranian, Russian and Turkish presidents in Tehran.

Iranian President Hassan Rouhani will host his Turkish and Russian counterparts Recep Tayyip Erdogan and Vladimir Putin, respectively, on September 7 in an attempt to find ways to end the ongoing crisis in Syria.

Zarif and Muallem also discussed regional issues and the latest developments in Syria, including the return of the displaced people to their homeland.

The top Iranian and Syrian diplomats stressed the importance of strengthening economic cooperation and the participation of Iranian firms in the reconstruction of war-ravaged Syria as well as cooperation in international organizations, particularly the United Nations.

Muallem hailed Iran's support for his country in the battle against terrorist groups and called on Tehran to continue its cooperation with Damascus in this regard.

Iran has been offering military advisory support to Syria at the request of the Damascus government, enabling its army to speed up its gains on various fronts against terror outfits.

Iranian Defense Minister Brigadier General Amir Hatami was in Damascus last week and signed an agreement on defense and technical cooperation designed to ensure the continued presence and participation of Iran in Syria's reconstruction.

In a meeting with his Syrian counterpart, General Ali Abdullah Ayyoub, in Damascus on August 26, Hatami warned of extra-regional countries' plots to sow discord in Syria and vowed the Islamic Republic's full support for the war-ravaged country in a bid to preserve its territorial integrity and improve its stability.

"Iran will spare no effort to maintain Syria's territorial integrity, because security in the country will help [improve] regional stability," the Iranian defense chief added.

A senior Iranian commander said on August 28 the country's military advisors will maintain their presence in Syria, giving more details about the military cooperation agreement reached between Tehran and Damascus.

"The continued presence of Iranian (military) advisors in Syria was one of the points of the defense and technical agreement between Tehran and Damascus," Iran's military and defense attaché to Damascus, Brigadier General Abolqassem Alinejad, said.

In a meeting with the Iranian foreign minister, Syrian Prime Minister Imad Khamis said the reconstruction process of his country would start in cooperation with friendly countries, particularly Iran and Russia.

Zarif also said the two countries' embassies should prepare the ground for the participation of Iranian private firms in the reconstruction of Syria.

The Iranian foreign minister and Syrian premier called for the exchange of economic delegations in a bid to boost cooperation.